So long, and thanks for all the Phish

After 2,035 days writing 2,531 stories containing 1.65 million words (thanks, Word Counter), this aging hack is celebrating his 26th birthday by hanging up his trusty MacBook Air and slipping off into semi-retirement.

It's vanishingly unlikely that I'll be around to toast birthday number 27, so this year's binary natal day seemed an appropriate milestone at which to wind down 25 years of disseminating digital geekery.

Arithmetic-savvy Reg readers will immediately calculate that I came to tech writing at the relative ripe age of 39. Before that I held a number of jobs, but the one that had the most in common with reporting on emerging technology was playing bass guitar in ska, Chicago blues, and rockabilly bands.

"Bass playing comparable to tech reporting?" I hear you thinking, "It appears that Dr. Alois Alzheimer may have already paid a visit to ol' Rik Myslewski."

Let me explain – but first an admission. You may have heard it said that playing bass is easier than playing guitar or keyboards.

However, just as a bass player is an essential member of a band – we'll ignore, from my day, The Doors – a tech reporter is an equally indispensable member of the tech ecosystem. But no reporter is as skilled, knowledgeable, or downright brilliant as the microarchitecture engineers whom they interview.

As a bass player, I've sat in with some accomplished shredders – Alvin Lee comes to mind – and as a tech reporter I've sat down with elite designers of Intel, AMD, ARM, and Imagination chippery. Humbling experiences in both cases, but invigorating ones, nonetheless. 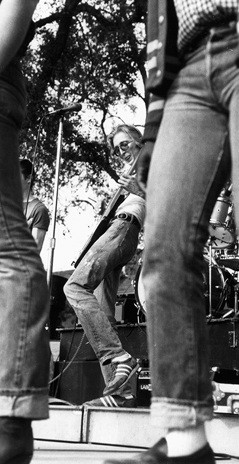 What, you expected a photo of me typing
an article about the Xeon E7 v2?

Bass players and tech reporters follow the same path: the more you listen, the more you learn. The more you learn, the better you get — your chops become "tastier". But you'll never breathe the rarified air inhabited by, say, Joe Satriani or Federico Faggin.

You also learn – hopefully – that you're not there to show off, but to support the work of the truly talented.

A quick anecdote: in my early days, I was once playing with a grizzled old Chicago bluesman, trying to impress both him and any eligible pretty li'l thing in the crowd with flash and dash on my Fender P-bass.

After one of my particularly ostentatious show-off bits, the old guy wearily turned to me and said, "Son, you ain't being paid no buck a note." Ouch.

To translate that into a reporter's job, I once received some excellent advice from the managing editor at a magazine for which I worked: "Fewer words. Better words."

Both music and tech have provided transformative moments that changed my world in an instant. Examples: when I first heard ska in the early 80s, and when in the early 90s a woman whom I was interviewing for an editor job said, "I'll require internet access" and I replied, "What's the internet?"

To be sure, there are notable differences between bass playing and tech writing – the most obvious being bullshit detection. If a band is slinging crap, you simply don't play for them. If a tech company is trying to pull the wool over the market's eyes, it's your duty to take them to task.

But that duty is to the public, and not an opportunity for self-aggrandizement. You and I both know the type of journalist I'm talking about. He (and it usually is a he) brings his prejudices to every story and delights in tearing apart each and every industry pronouncement as a way to tell the world, "Look at how fucking smart I am!"

You may again see my byline here on a freelance assignment or three, but it's now time for me to plug my fretless Fender Jazz into my Peavey and try to keep up with some old tunes by the English Beat, Buddy Guy, and Gene Vincent and His Blue Caps.

To belabor my musical metaphor just a wee bit more, if reporters are bass players and engineers are frontmen, what are PR flacks?

May I suggest roadies?

I've played in bands with brilliant roadies and I've played in bands with knuckle-dragging dolts. As I also say good-bye to my friends in the PR biz, I must note that my 1.65 million words wouldn't have been nearly as accurate if I hadn't been fortunate enough to work with far more of the former than the latter. The best know that their job is to set things up, make sure everything is in tune, and then get off the stage.

Thanks, guys 'n' gals. When all has gone smoothly, we've made beautiful music together.