Scality has upgrade its RING object storage software to v4.3.

RING software distributes object storage across multiple server nodes and uses erasure coding to ensure its integrity. Scality claims v4.3 "improves overall performance across a broad range of applications and workloads and enhances enterprise file operations by as much as 60 - 95 per cent."

As a side note, Scality is now describing RING as software-defined storage, meaning no hardware lock-in. 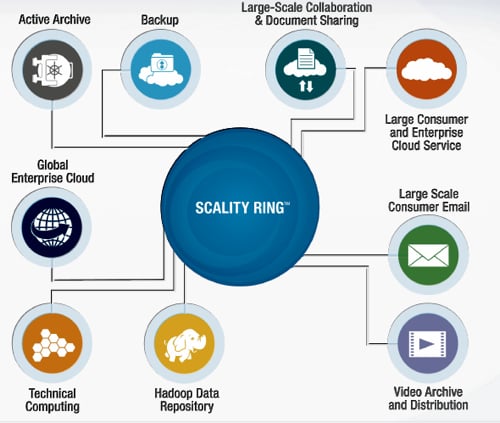 The company has recently increased its exec ranks, appointing:

In the US, the Los Alamos National Laboratory (:ANL) is using Scality RING storage to store data as it runs simulations to watch over the state of the US nuclear weapon stockpile. The simulations used to test the arsenal’s physical condition and operational readiness, and some of the weapons are up to 40 years old.

The supercomputer simulations can run for months and, Scality says, this "requires storing tens of petabytes of data on hundreds of thousands of physical disks for each simulation." It could involve storimg up to 500PB of data. LANL is going to be using block, object, HDFS, and file interfaces to the data whose integrity will be safeguarded by erasure coding.

The exec ranks enlargement, marquee customers like LANL, greater than 500 per cent revenue growth from 2012 to 2013, and general business activity leads CEO Jerome Lecat to declare: "2014 is the most exciting year since we founded Scality. It is clear that we are crossing the chasm. ... Software-Defined Storage is becoming the new norm. While this transformation will still take several years, it is unstoppable.”

We think Scality's view is that object storage is one way of storing double and triple petabyte levels and beyond of data on disk with better-than-RAID protection and the avoidance of filesystem limitations, yet with access using existing block, file and HDFS interfaces as well as object storage protocols.

That strategy seems to be working. RING 4.3 ships this month. ®