If such a surface moves in isolation, the air will simply flow around the edges from one side to the other and there will be little radiation. It is necessary to have some sort of enclosure to prevent that happening. The enclosure needs appreciable volume, otherwise the air inside will act like a stiff spring and restrict the movement.

Clearly low frequency reproduction requires physically large devices. It is simply not possible to radiate low frequencies from iPhones and tablets when the volume of the product is less than the displacement of a large woofer, which is why such devices need to be used with earphones for music.

Don’t expect any leaps in the sound from the speakers in small IT devices: Moore’s Laws doesn’t apply to acoustics. On the other hand if the main purpose of the hand held device is speech communication, there is no requirement for low frequencies.

The advent of the flat screen TV has fuelled demand for equally flat loudspeakers. Whilst impossible with a legacy approach, there is no fundamental obstacle to more modern techniques and materials achieving good results. The problem is that the legacy loudspeaker industry cannot disrupt itself and the disruption has to come from outside. 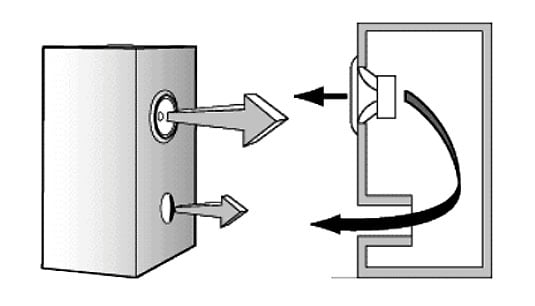 Back in the dark ages, magnets were made of alnico (aluminium, nickel and cobalt alloys) whose magnetic characteristics dictated long thin magnets. Small voice coils sat in the centre of cones made of flimsy paper. It made sense, then, to try to reduce the probability of the cone flexing by using resonant techniques such as bass reflex enclosures.

These employ a mass of air in a tube or port that resonates with the air in the enclosure to amplify the sound from the back of the cone. Whilst the output is increased and the low frequency response is extended, this is achieved at the expense of wrecking the speaker’s time response. 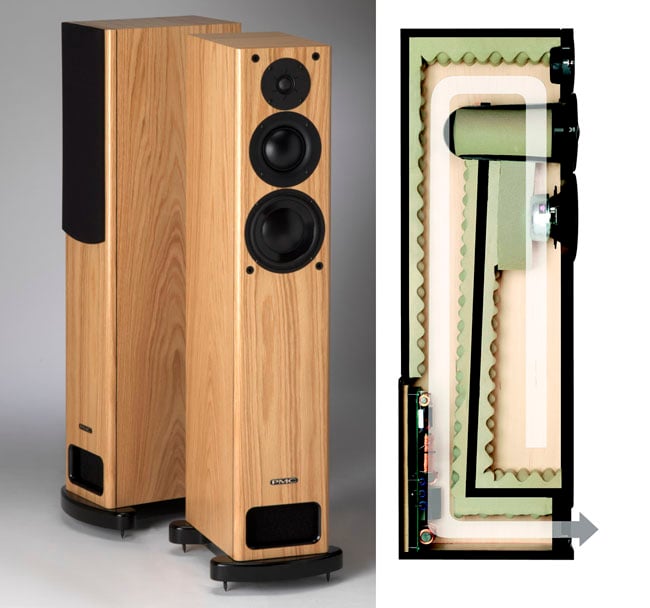 PMC's OB1i – one of many takes on Transmission Line loudspeaker design

In the transmission line loudspeaker, the back wave from the woofer is delayed by guiding it through a folded pipe that causes a delay. At some frequency, the delay will be equal to half a cycle and the delayed back wave emerging from the pipe will be in phase with the radiation from the front. It is only in the case of a sine wave that a delay is indistinguishable from an inversion and we know a sine wave carries no information. In the case of a transient, the transmission line speaker destroys the waveform. The baby is thrown out and the bathwater is retained. 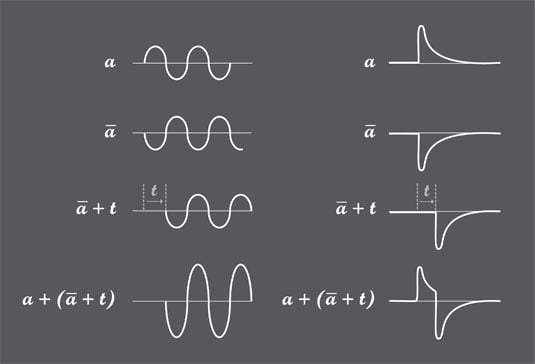 Transmission line speaker design debunked: On the left, a sine wave a leaves the front of the speaker. An inverted sine wave ā leaves the rear. Rear wave is delayed by transmission line to become ā + t. When this emerges from the transmission line it is in phase with a and adds up. On the right, a transient is applied instead. What comes from the speaker is unrecognisable because a time delay only looks like an inversion to a symmetrical and continuous signal. Unfortunately, most of the information in audio is in the transients.

The only woofer design that is capable of being made time-accurate is the sealed enclosure. Modern drive units with stiff carbon fibre cones and large voice coils overcome break up due to internal pressures.

Woofers are always omni-directional because they are so small compared to the wavelength at which they work. But as frequency rises, a large diaphragm becomes too directional and it is necessary to switch to a smaller drive unit called a tweeter. The two drive units are supplied with the appropriate parts of the input spectrum by a set of filters known as a crossover network.

Passive crossover designs abound but will always have inherent delays

It should be an obvious requirement that if the two outputs of the crossover are added back together the result should be the input waveform. Unfortunately the majority of crossovers simply fail to meet that criterion. Passive crossovers will never be able to meet it. Active crossovers, in which the filtering is performed in analogue or digital electronic circuits at signal level, can meet the criterion but often don’t because they have simply copied the filtering of a passive crossover.

Next page: Making waves with IT
Page:

Opinion Of all the non-carbon energy options we have, this is the only one which can keep the lights on
Science15 Aug 2022 | 15