Astro-boffins have come up with new and compelling evidence that the ocean buried inside Saturn’s largest moon Titan is probably as salty as Earth’s Dead Sea, sadly making it an unlikely location for alien life. 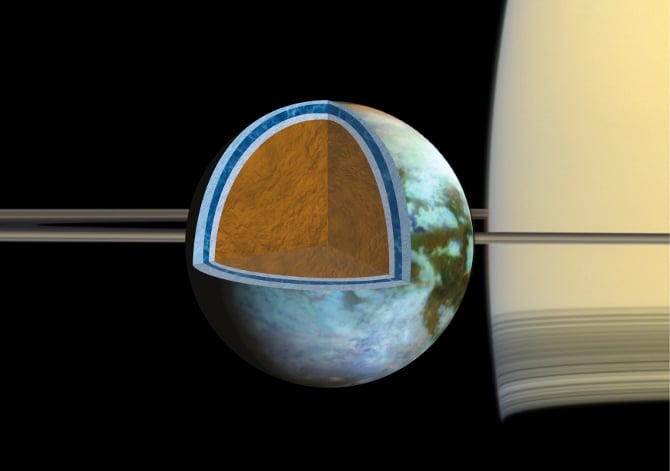 The scientists used the data collected during repeated flybys of Titan by NASA’s Cassini satellite to study the gravity and topography of the massive moon. The data gave the boffins a model structure for Titan that they could use to find out more about its outer ice shell.

Scientists reckon that this shell is rigid and in the process of freezing solid, something the current study agrees with. But the researchers figured out that a relatively high density was needed in the subsurface ocean to explain Titan’s gravity. That density is probably provided by extremely salty water, mixed with dissolved salts that contain sulphur, sodium and potassium.

"This is an extremely salty ocean by Earth standards," said the paper's lead author, Giuseppe Mitri of the University of Nantes in France. "Knowing this may change the way we view this ocean as a possible abode for present-day life, but conditions might have been very different there in the past."

The clue is in the comparison to the Dead Sea – so not really a hospitable location for life to be flourishing. The saltiness isn’t the only thing getting in the way of extraterrestrial microbes though. Cassini data also shows that the ocean is slowly crystallising and turning to ice.

The topography indicates that the thickness of Titan’s ice crust varies from place to place, which would be best explained if the shell was stiff and slowly freezing. This process would also mess with the habitability of the moon, as it would limit the ability of materials to exchange between the surface and the ocean.

Boffins expect to keep getting new info out of Cassini’s data for years to come. The next item on the checklist is to search for clues on how Titan replenishes the methane in its atmosphere.

The moon has around five per cent methane in its atmosphere, but researchers don’t know where it comes from. Molecules of the gas are short-lived because they get broken up by sunlight, so its constant presence in the air means the stuff must be leaking from somewhere.

Titan’s methane doesn’t seem to be coming from convection or plate tectonics under its ice shell, so some other process, likely geological, must be causing the localised, intermittent resupply. Even the reams of data from Cassini may not be enough to crack the mystery, however.

"Our work suggests looking for signs of methane outgassing will be difficult with Cassini, and may require a future mission that can find localised methane sources," said Jonathan Lunine, a scientist on the Cassini mission at Cornell University and one of the paper's co-authors. "As on Mars, this is a challenging task." ®