Whatever Microsoft is doing to get punters adopting Windows 8.x isn't working, at least if the latest figures from Netmarketshare showing its older operating systems growing faster than its latest progeny are any guide.

We've now tracked Netmarketshare's data for nine months and as the table below shows, Windows 7 has enjoyed steady growth over that period. Windows XP has also had its moments, as it did between May and June 2014 when it accounted for 0.06 per cent more of the operating systems Netmarketshare detected with its methodology of digging through web server logs.

Even Windows Vista managed to grow by market share over the last couple of months.

Statcounter's trends for the same nine months we've looked at on Netmarketshare tell a similar story, as the graphs below show. 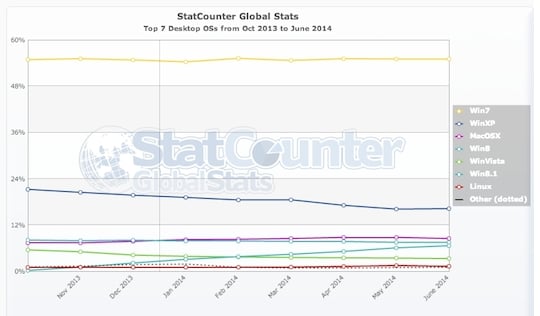 Both sets of numbers show that lots of users are perfectly content with Windows 7, either on new PCs or old machines. Windows 8.x remains a hard sell with even the millions of new PCs reaching the market each month not giving it much of a boost. Just why XP isn't dropping off a cliff is hard to explain, other than the worn argument that in some parts of the world they just can't be bothered moving. ®