If you want all-dancing, all-singing multimedia connectivity in your motor then Parrot’s Asteroid tablet is the thing for you. It’s not cheap though. You can find the system for around £270 but you will need to budget about £80 for installation unless you are very adept at such things. Once it’s up and running you will have a connected media system equal to the best factory fitted OEM systems. 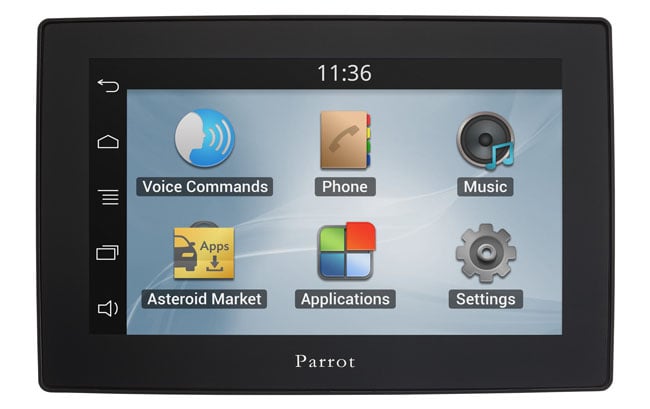 The Asteroid system comprises a 5-inch capacitive tablet that runs a modified version of Android 2.3 and the eBox which is where the brains and power of the system are stored including the CPU together with the 4x40W amplifier, digital sound processing, noise cancellation and lots of other neat stuff.

The tablet can either be mounted in your dash if space allows or alternatively stuck to the windscreen using a conventional screen mount. The system lets you access a range of free and premium Parrot-curated Android apps including iGo, TomTom Navigation, Waze, Glympse, TuneIn, VLC, Spotify and suchlike. Alas, you don’t get access to the Google Play Store.

The system can connect to the internet at either a 4G or 3G speeds via your smartphone or a USB dongle and once connected, the Asteroid can act as a Wi-Fi hotspot. The Parrot Asteroid comes complete with steering wheel controls and a snakes’ nest of cables, wires and aerials but looks remarkably smart and unobtrusive when it's (properly) installed.

With internet radio giving me all the stations I want, I’ve never felt the need to cough up for a DAB tuner for the house but every time I’ve driven a car with a digital radio tuner in it, the scales fall from my eyes ears and I suddenly realise that DAB makes a good deal of sense in the automotive environment.

Pure’s H260DBi is one of the better DAB head units not least because it’s yours from Halfords for a piffling £130. What with Pure’s expertise in the digital radio field the high quality, crisp DAB sound was probably a given while the subtlety of the tone controls on the H260DBi put some units costing twice as much to shame.

Pure has also added some useful other features to make this a very solid all-rounder. As well as a CD player and a traditional AM/FM radio there’s a 3.5mm input and a USB port and Bluetooth so you can you wirelessly stream music from your smartphone which is useful for the likes of Spotify or making hands-free phone calls. To add a bit of visual spice to proceedings the coloured fascia can also be matched to your car's interior. Some users report slightly flaky Bluetooth pairing but that’s something you can say about almost all head units - some just don't play nice with certain makes of phone.