'I have never been so scared', admits Nick Hancock

Brit adventurer Nick Hancock has admitted he's "never been so scared", after enduring a storm last week that blew a good part of his food supplies off the North Atlantic islet of Rockall.

Hancock landed on the granite outcrop on 5 June, hoping to spend 60 days in a survival podule, in the process breaking the occupancy record of 42 days set by three Greenpeace activists back in 1997. 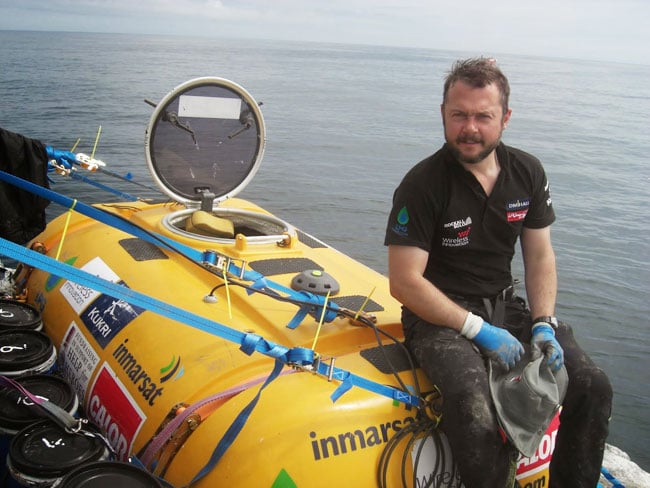 The calm before the storm: Nick Hancock and his survival podule

The "Rockall Solo" adventure - in aid of Help for Heroes - started well enough, with the weather during the first couple of weeks allowing some light twitching and general pottering about.

That all changed last Tuesday night, however, when Rockall was lashed by some seriously inclement weather. Hancock wrote on Friday:

The storm that hit on Tuesday night was the worst experience of my life, ever. I have never been so scared, not helped by the worst of the weather coming in the hours of darkness so I could neither see nor brace myself for impacts by spray and waves. All evening and into the night the sea state slowly got worse and the wind strength grew to over gale force, until at around 0300hrs the pod was hit hard by a wave, fifteen metres above sea level. We were shunted around a foot but fortunately quickly returned to our original position. I was sure that if I was hit with another wave like that or bigger, that would be me washed off Rockall. Fortunately that was the biggest. At least part of the reason that I was so badly affected is that Hall's Ledge* is South facing, and all the waves and wind were coming at me from the South. Had they been from the North, or even round to the North West or East I would have been at least partly sheltered, but in fact had to take the full brunt of the storm head on.

The cruel sea claimed "four barrels of kit, which contained my buoyancy aid and quite a lot of my remaining rations, although fortunately I had brought as much food as I could fit into the pod before the storm".

Hancock explained: "A quick inspection on Wednesday morning revealed slack in the ratchet straps at the East end of the pod, confirming that it had not returned fully to its original position, but no obvious damage, except for the lost kit. The barrels had all been tethered to the rock, the pod or both. The tethers hadn't failed, but the handles on the barrels had been torn off and left forlornly swinging on the leashes."

With vital nourishment consigned to Davy Jones' Locker, the plucky Brit has made the decision to cut short his holiday, despite offers by sponsors LPG Exceptional Energy and Calor to get more supplies out to the islet.

He said: "I declined as the cost would be significant, I'd rather money was donated to Help for Heroes, and a boat coming to drop off food may be using the best weather window I have to get off here safely."

With clearer skies on the horizon and enough food to reach 45-50 days atop the rock, Hancock should break the Greenpeace record. A couple of days before that, he'll also claim the 40-day solo crown from ex-SAS chap Tom McClean, who claimed Rockall for the UK back in 1985. ®

*The flat platform below Rockall's peak, to which the survival podule is lashed.

Decapitating Rockall: How a 1970s Navy expedition blasted the top off the Atlantic islet

Nick Hancock battens down the hatches on North Atlantic islet

An early exit, but still likely to break occupation records