Pic Boffins have identified the fossil remnants of a vast creature that had a jagged-edged ripper beak, and appears to have had the largest wingspan of any bird ever. 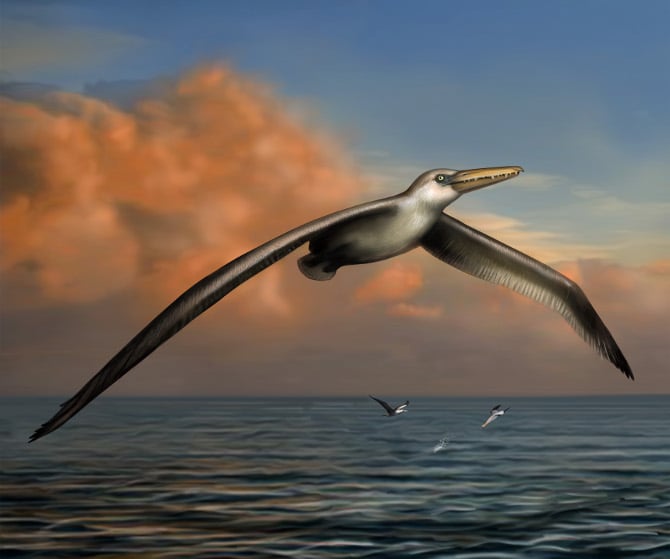 The massive extinct avian would have had a wingspan of 20 to 24 feet (6m to 7m), more than twice as wide as that of the Royal Albatross, the largest living flying bird.

Although the cumbersome appendages put the species above some theoretical upper limits for powered flight in animals, the fossil proves that Pelagornis sandersi was able to put its enormous wings to good use.

Not only is the species extinct, but its entire clade, Pelagornithidae, was last seen in prehistoric times.

Using the relationship between bone lengths and feather lengths in living birds, the researchers, led by Dr Daniel Ksepka of the Bruce Museum in Greenwich, Connecticut, believe that the ancient avian was an expert glider.

"Pelagornis sandersi could have travelled for extreme distances while crossing ocean waters in search of prey," said Ksepka.

Its wings were long and slender, allowing it to stay aloft despite its enormous size. The bird also had the paper-thin hollow bones of a flying bird and its stumpy legs and gargantuan wings would have made it ungainly on land.

The most puzzling question was how the creature actually took off. It was likely to be too big to flap its wings and take off from a standstill, but computer models show that it may have gotten off the ground by running downhill into a headwind or using air gusts to launch, much like a hang glider.

Once in the air, P. sandersi would have used the air currents rising from the ocean to cruise above the waves for miles without flapping its wings, occasionally swooping down for soft-bodied prey like squid and eels. In this mode of flight it would have resembled the crazy Cold War era Soviet Ekranoplan craft, likewise able to skim the ocean for hundreds of miles.

The fossil was located by Charleston Museum volunteer James Malcolm in 1983, during excavations for a new terminal at Charleston International Airport in South Carolina. Bird remains are relatively rare because their bones are paper-thin, but this fossil was very well-preserved.

The bird’s toothy grin allowed the boffins to figure out that it was part of the Pelagornithidae clade – giant seabirds with bony tooth-like spikes in the jaw.

"Pelagornithids were like creatures out of a fantasy novel - there is simply nothing like them around today," said Ksepka.

The huge seabirds were found all over the world for tens of millions of years, but vanished during the Pliocene era three million years ago in mysterious circumstances. Researchers hope that this fossil could still help them understand why these birds eventually died out.

The full study, “Flight performance of the largest volant bird”, was published in the Proceedings of the National Academy of Sciences (PNAS). ®