What's it all about, Alfie?

EMC's been keeping quiet on the whole "how fast can this baby go" front when it comes to the VMAX3 range.

But the storage vendor used its megalaunch – with its "Redefine Possible" tagline and futuristic look – to break its silence. So what's under the hood?

EMC has extended VMAX to run more and different workloads. Each of “Gen 2” VMAX's models was treated to a controller refresh. The Enginuity operating system has been rebranded HYPERMAX OS, and being made capable of running more system software applications.

Some system compute has gone to the array but it is not being positioned as a general converged compute and storage system. 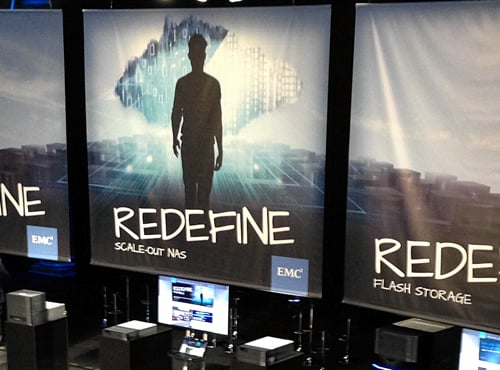 The TwinStrata acquisition is clearly about bolting a public cloud storage backend on VMAX. Perhaps that potential for offloading bulk, low-access rate data explains the otherwise curious lack of any significant capacity increase for VMAX:

Yet disk drive counts have increased at at the mid-range and top end. If we look at the drive counts, 2.5" drives first:

Turning to 3.5" drives, the largest capacity is 4TB as before, even though 6TB drives are becoming available. The drive counts and raw capacity numbers for old and new VMAX models are:

Again, drive count increases and, again a lot of disk drive capacity is used up moving from raw capacity to usable capacity.

VMAX3 systems have twice the number of 16 Gbit/s full line-rate ports to double throughput compared to the previous VMAX generation. 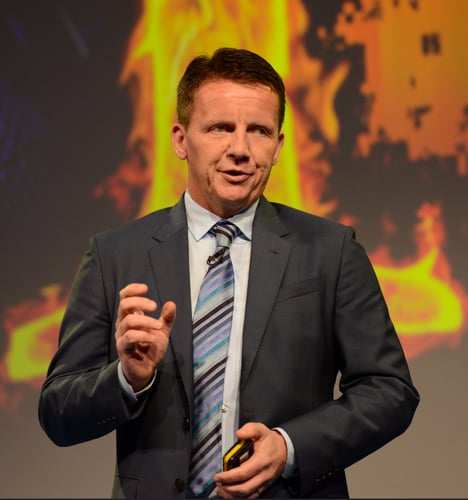 What we didn’t hear about was any VMware VVOL support, VVOLs being VMware’s virtual storage containers for virtual machines. EMC’s Jeremy Burton, president for products and marketing, said the VMware schedule is for VVOLs to come in the first quarter of next year, with VMAX and XtremIO VVOL support in the following quarter, also ScaleIO and VNX but not Isilon, it not being a transaction-oriented system. ViPR, EMC’s overall storage resource management software product, will also support VVOLs.

VMAX has become a much more capable array. It should be easier to manage and could simplify a customers data protection arrangements with the direct link to Data Domain arrays. Yet ViPR is also getting stronger and it has its own block storage capability, although nowhere near as performant as VMAX, being oriented towards commodity, relatively dumb arrays.

In theory it looks as if customers could move towards interacting with VMAX more and more through ViPR in the future.

There were several other parts to this launch-fest.

The Direct Protect data protection route between VMAX and Data Domain is only the beginning. It uses changed block tracking and dedupes them.We can assume it will be extended to other EMC storage arrays, such as for example, VNX, Isilon and XtremIO. With it backup software becomes a manager, not a mover. The array moves the data, and media servers have less of a role, if they have one at all, in future.

Overall this launch demonstrated the breadth and depth of EMC’s storage portfolio. The only obvious hole is for so-called hyper-converged systems like those from Nutanix, Simplivity and NIMBOXX. However Project Mystic, according to Burton, will fill that cavity, using VMware vSphere and VSAN software, EMC storage hardware (not ScaleIO) and, possibly, Brocade networking. The target market are SMB and departments in enterprises, and sub-1,000 VDI opportunities.

It’s not a traditional EMC market sweet spot and work is being done on it. Any product has to be inexpensive and simple to use. Maybe we'll see an EMC MysticPod, a template for VARs to build to, like the Cisco/NetApp Flexpod. The Vulture expects EMC to crack that nut and a hyper-converged box to come sailing down the Mystic River ®