Verizon and Netflix are having another go-round in their ongoing war over network access for streaming video.

In a report posted to its Public Policy Blog, Verizon vice-president of federal regulatory affairs David Young said claims that it deliberately throttles Netflix traffic are untrue and that any traffic bottlenecks were being caused by other companies that Netflix uses to deliver its service to ISPs.

"Netflix chose to attempt to deliver that traffic to Verizon through a few third-party transit providers with limited capacity over connections specifically to be used only for balanced traffic flows. Netflix knew better," Young wrote.

"Netflix is responsible for either using connections that can carry the volume of traffic it is sending, or working out arrangements with its suppliers so they can handle the volumes."

To underscore its point, Verizon posted a diagram illustrating where it thinks Netflix traffic was being slowed in the Los Angeles area. The report claims that slowdowns occurred outside of Verizon's networks, and that no other service or application is experiencing the sort of slowdowns Netflix is experiencing. 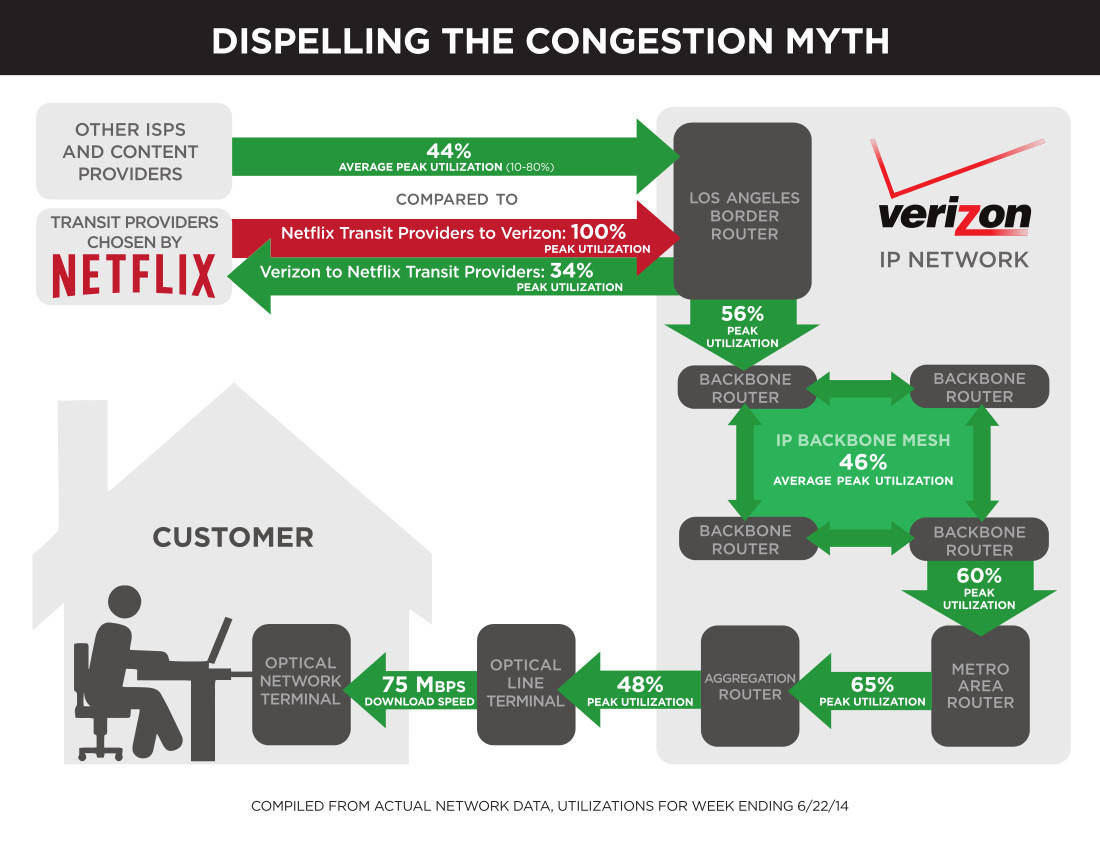 "What it boils down to is this: these other transit and content providers took steps to ensure that there was adequate capacity for their traffic to enter our network," Young claims.

"In some cases, these are settlement-free peering arrangements, where the relative traffic flows between an IP network provider and us remain roughly equal, and both parties invest in sufficient facilities to match these roughly equal flows."

Netflix, interestingly enough, did not deny or refute Verizon's data. Instead, when contacted by The Reg, the company said that the company would like to thank Verizon for "laying out the issue so nicely."

Congestion at the interconnection point is controlled by ISPs like Verizon. When Verizon fails to upgrade those interconnections, consumers get a lousy experience despite paying for more than enough bandwidth to enjoy high-quality Netflix video. That's why Netflix is calling for strong net neutrality that covers the interconnection needed for consumers to get the quality of INTER-net they pay for.

The exchange is the latest in an ongoing row between the two firms over the performance of Netflix video on Verizon's network. The matter nearly went to court earlier this year when Netflix began serving users with error messages blaming Verizon for poor video performance. ®