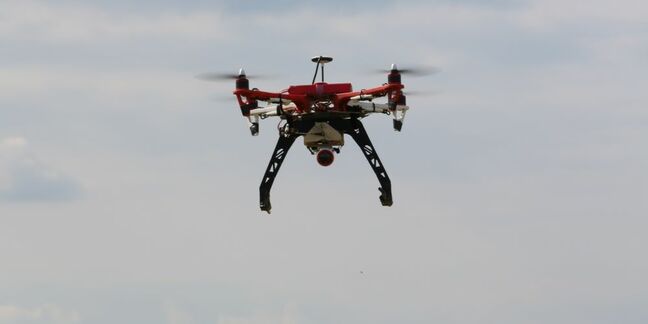 A parliamentary report into regulation surrounding the use of drones has recommended that Australia consider creating a tort of privacy invasion – something ruled out by the country's attorney-general George Brandis as recently as April.

In an example of the strange bedfellows politics can make, privacy activists and farming lobbies agree – for, perhaps, different reasons – that unfettered flying of drones poses privacy risks, and the government-dominated but bipartisan committee agrees.

The government-dominated “Standing Committee on Social Policy and Legal Affairs” has published a report entitled Eyes in the sky, which notes that privacy and surveillance laws around Australia are “a complex web”.

Hence the report's recommendation that “the Australian Government consider introducing legislation by July 2015 which provides protection against privacy-invasive technologies (including remotely piloted aircraft), with particular emphasis on protecting against intrusions on a person’s seclusion or private affairs”.

Such protection, the committee recommends, should include a tort of privacy invasion with “effective” opportunities for complainants to seek remedies.

The recommendation has bipartisan support, with the ALP's Sharon Claydon (deputy chair of the committee) saying that “there are a number of situations” in which the country's Privacy Act doesn't protect individuals against the invasive use of drones.

The committee has asked that governments Australia-wide harmonise their surveillance device laws to add data surveillance, optical surveillance and tracking devices to regulation. It also asks that the use of drones by law enforcement be regulated “where that use may give rise to issues regarding a person's seclusion or private affairs”.

However, there appears to be a sting in the intentions of the committee. Australia's government, as have others around the world, is finding itself under siege by farming lobbies about the use of drones by animal rights activists uncovering abusive farming practices.

As noted in the report: “The Committee is aware of media reports that animal protection groups have used RPAs [remotely piloted aircraft – ed] to monitor agricultural facilities without their owners’ consent, with the intention of exposing animal cruelty or evidence of inaccurate claims about farms’ free-range status … Some farming groups do not consider the use of RPAs by activist groups to be appropriate.”

In fact, the committee explicitly sweeps corporates into its view of privacy, stating “the unfettered use of RPAs to undertake surveillance operations and monitor the activities of an individual or a company is not consistent with the intent of privacy laws” (emphasis added).

The report also recommends new safety protections around the use of drones, and suggests that aviation regulator CASA add privacy information to documents it publishes for drone operators. ®

Drones thrown a bone: Americans can ask nicely to go where FAA says they can't roam

Wanna fly over a music concert? Now maybe you can