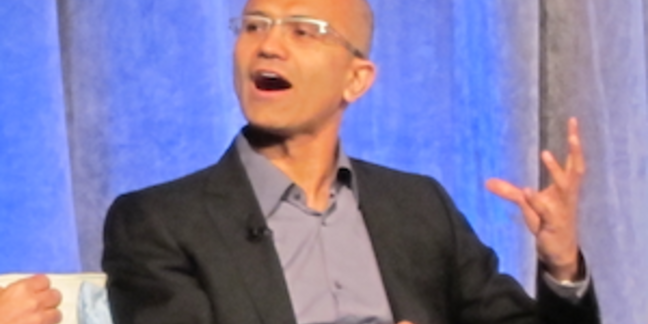 Comment "We're keeping Xbox and we're going to make cuts." There, in under 10 words, is the substance of what Microsoft CEO Satya Nadella took 3,300 words to say in a message to investors, staff and the media last week.

If you are a Microsoft salesman keen to answer key questions from customers such as: "What will you be doing differently?" or "What will be new and exciting?", you will have nothing new from the CEO to go on.

Nadella's "memo" is not just verbose, it's thick with repetitive platitudes and windy aspirations - so much so it almost makes you yearn for Steve Ballmer's bluntness. Clarity and direction were mostly lacking - two things Microsoft most needs right now.

Nadella gave his readers a Bollywood-length epic of motivational clichés. "Our first-party devices will light up your digital work and life" was one of the most wretched. Another contender was "drive customer usage first and foremost" … a radical idea nobody has yet tried. Or how about "Microsoft has a unique ability to harmonize the world's devices (by remotely turning them all off? - ed] apps, docs, data and social networks in digital work and life experiences so that people are at the center and are empowered to do more and achieve more".

It's all weirdly disembodied and robotic - perhaps an early experiment with "Cortana (CEO Edition").

Nadella is hard-working and bright, and has done a brilliant job with Microsoft's cloud Azure. Many hoped that, with his ascent, Microsoft would have more than a functional process-driven COO filling the CEO's shoes, with the Board continuing to pull the strings. But reading his memo, they may be getting a sinking feeling.

We know the Board remains hopelessly divided over strategy, giving a seat to an activist shareholder who wants to see Microsoft shed its consumer businesses, and focus on higher margin, more profitable enterprise IT. Yet the Board/Nadella (Boardella?) didn't give a compelling reason why Microsoft should continue to dabble in tablets, make "first party hardware", (that's the new expression for own-brand Lumia smartphones and Surface) or consumer services.

Nadella had previously tried to put a sticking plaster over the gash by inventing a new cliché - "Cloud first Mobile first" - but this has already come unstuck. The dilemma highlighted by "Cortana-gate" is that there will be times when they can't both come first - you deprecate the interests of one platform (such your branded hardware) to advance the interests of another (such as your branded service). Or vice versa.

But Nadella could have done things a little differently. He could have offered a bold new initiative to differentiate Microsoft as a platform from Microsoft as a company. There are many ways Microsoft isn't Google, but apart from the "Scroogled" ad campaign, it's oddly nervous about saying so. Microsoft could, for example, share anonymised consumer data with business, commoditising the data just as it commoditised the personal computer.

The speech-that-wasn't-a-speech could have benefited from using Microsoft's own products as concrete illustrations. The challenge is why Microsoft needs to retain a consumer division, but this is best illustrated by real examples – where the benefit is positive, or where the distinction between consumer and enterprise is meaningless. Or where consumer drives IT sales (or even vice versa), for example.

There was little recognition that when Microsoft's "consumer experience" is compared to the iPad, Microsoft doesn't come well out of it. Surface might look beautiful and be full of clever hardware - but I can't envisage anyone managing a decent size music or photo collection using just the Metro software - it just isn't up to the job. Can you? It would take an honest CEO to say so.

And where Nadella has stamped a personal hallmark, it's quite ominous - as readers have already spotted.

"Each engineering group will have Data and Applied Science resources that will focus on measurable outcomes for our products and predictive analysis of market trends," is one of the few concrete promises he made. Words to set the pulse racing, and as readers have pointed out, Windows 8 didn't fail because the programmer's lacked market data or didn't have enough focus groups. It was questionable strategy executed using some pretty awful design.

"Thinking that statistics and data are about numbers is like thinking that the Declaration of Independence is about spelling and grammar; statistics is about insight," responded one reader. "And then I felt better about Windows 8 being data-driven: they just didn't collect the right data or they mis-interpreted it (or, even more likely, they extrapolated beyond the circumstances that gave rise to their data)."

Sinofsky's catastrophic management created to a lot of pain (disrupting the Windows upgrade cycle and the revenues that come with it; inviting businesses to look to Apple and Google for productivity platforms) and no discernible gain. I predicted Surface would be landfill in 2012 - and the costs continue to mount.

Employees will also be promised greater mobility "to move about the company". This means less ownership of products, and a higher risk that they will take less personal responsibility for failures. How does this square with Nadella's "more emphasis on accountability"?

To conclude, Nadella is still relatively new in the CEO's seat and he may still be in a honeymoon period with most Microsoft watchers. But six months on, there's no indication that he has something interesting to offer other than efficiency and data-driven managerialism. I hope I'm wrong, but we didn't see it last week. ®