Ever since the putative discovery of the Higgs boson in 2011, one of the next-big-thing searches in physics has been to confirm the mechanism by which the exotic particle imparts mass to other particles. Now, a team led by boffins from Brookhaven National Laboratory think they've contrived just such a test.

In work conducted at the LHC's ATLAS experiment, now at Arxiv, the ATLAS collaboration says it's detected the production of W boson pairs out of trillions of proton-proton collisions, and that the process they've observed helps explain the relationship of the Higgs boson to mass.

The Higgs was predicted by Peter Higgs et al, as the particle that gives gauge bosons (W+ W- and Z) their mass. To cite from Wikipedia, “At a critical temperature the Higgs field becomes tachyonic, the symmetry is spontaneously broken by condensation, and the W and Z bosons acquire masses”.

While the mechanism, like the Higgs boson, has been theorised since the first half of the 1960s, it's ferociously difficult to observe – which is why this is the first time it has been. 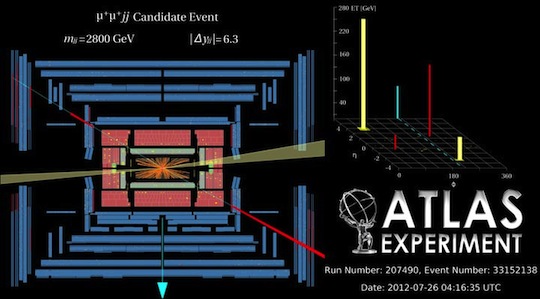 As Brookhaven's Marc-André Pleier, one of the leaders of the analysis, says in the laboratory's release: “Only about one in 100 trillion proton-proton collisions would produce one of these events … You need to observe many to see if the production rate is above or on par with predictions” (For those who understand the units used in particle physics, the researchers analysed the outcomes of 20.3 inverse femtobarns of data to get this result).

In the analysis, the ATLAS group was looking for pairs of W bosons, produced by electroweak interactions in the proton-proton collisions, which then scatter from each other, and in spite of the rarity of the interaction, 34 such events were identified.

That test yields only a 95 per cent confidence level, too low to proclaim a discovery but enough to get physicists excited at the data they'll collect when the revamped LHC (with more power) fires up. The 13 TeV setup will start collecting data in the northern 2015 spring, and will collect as much as 150 times as much data as the previous 8 TeV configuration.

“Now with the LHC data in hand, the measured rate agrees with the prevailing theory’s predictions and establishes a signal at a significance level of 3.6 sigma—strong evidence, according to Pleier”, the Brookhaven announcement states.

Pleier says the interactions so far observed match the rate of W-W production and scattering predicted by Standard Model physics – which is yet another arrow-to-the-knee for more exotic physics.

With the Higgs working as expected, “For the first time, we can rule out certain models or predictions that we could not before,” Pleier says. ®