iPad? More like iFAD: We reveal why Apple fell into IBM's arms

But never fear fanbois, you're still lapping up iPhones, Macs 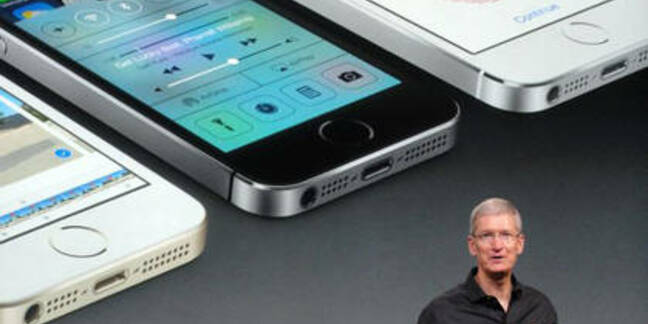 Apple has been talking up its strong Mac and iOS device sales in its latest quarter – but the real news was a stonking slump in iPad numbers.

The Cupertino giant said the three-month period ending June 28 was its best-ever fiscal third quarter on record. It reported revenues of $37.4bn, up six per cent year on year, which led to a $7.7bn net income, up from $6.9bn a year ago [PDF]. Apple's $1.28 profit per diluted share, up from $1.07 in Q3 fiscal 2013, was slightly above the Yahoo! Finance and Marketwatch average estimate of $1.23.

Apple boss Tim Cook said the third quarter was buoyed by Mac and iPhone sales, which were also records for that quarterly period. Apple said it sold 35.2m iPhones (up 13 per cent on last year), bagging $19.75bn in revenue (up nine per cent), and sold 4.4m Macs (up 18 per cent), bringing home $5.5bn (up 13 per cent).

Though iPhone and Mac sales were strong, the iPad had a rough quarter as tablet revenues at Apple were down 8 per cent, year on year, to $5.8bn from 13.2m units sold (down 9 per cent). Cook credited the drop in part to inventory reduction over the quarter.

The Apple CEO also expressed hope that the iPad business will be bolstered by the recently announced mobile mega-deal with IBM. He noted that the partnership with Big Blue will allow for tablet-specific apps to be written rather than just adapted from desktop software.

"We think there is a substantial upside in business," Cook said.

"We think that the core thing that unleashes this is a better go-to-market, but even more importantly, apps that are written with mobile first in mind."

Apple's CEO is also hoping to get a boost from the company's developer and content partners on its iTunes and App Store services. The company reported $4.4bn in quarterly revenues from the iTunes, Software and Services unit, up 12 per cent on Q3 fiscal 2013.

Cook said that over its life to date, the App Store has served up 75 billion downloads and paid out $20bn in revenues to app developers.

As for revenues broken down by region, China romped home with 28 per cent growth on Q3 fiscal 2013; the Americas and Japan has flat revenue growth, year on year, of one per cent; and Europe and the rest of the Asia Pacific grew six per cent. Retail store sales were also flat at one per cent, year on year.

The Apple head honcho also talked up the coming tie-up with Beats Electronics, which is set to become the 30th Apple acquisition of the year when it is expected to close in the coming quarter.

With the back-to-school shopping season kicking off and the release of OS X Yosemite and iOS 8 looming, Apple is predicting an even stronger quarter, ending late September. The biz is estimating that its Q4 numbers will see revenues between $37bn and $40bn, putting the company on track to surpass $175bn in revenues for the full fiscal year. ®