Disaster recovery company Quorum uses a customer’s second site or its own cloud site to provide the user with backup and DR location for physical and virtualised server customers, and claims one-click recovery through its on-site onQ appliances.

According to the biz, the highly available appliance “clones your servers right onto our appliances and provides instant recovery of your business applications after any storage, system or site failure. … you can test it under real-world scenarios any time. Backup just can’t do that.”

The onQ software keeps up-to-date copies of all the user’s operating system, application and data files on both the local and remote appliances, plus ready-to-run virtualised server clones or Recovery Nodes.

If there is an on-site or whole-site failure, these recovery nodes in the on-site onQ appliance or the DR site are fired up, and users reconnected to them in as little as five minutes, perhaps less. Its DR-as-a-service and test runs take as little as 15 minutes, Quorum claims.

Fully deduplicated system snapshots can be taken at 15 minute or larger intervals, meaning RPOs (Recovery Point Objectives) can be as low as 15 minutes. All data set to the DR appliance is compressed and encrypted for transmission through an SSH tunnel. 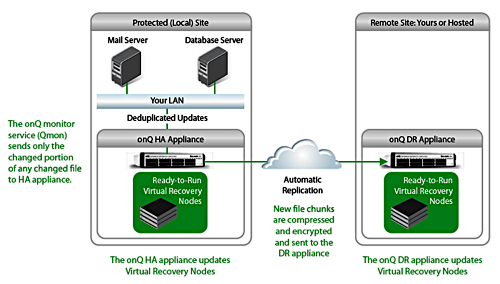 Quorum’s technology has software in the protected servers that is application-agnostic and “does not use block-by-block disk imaging technology. It uses integrated operating system features to detect changed files and then [uses] … deduplication and sub-file-level incremental update technologies to transfer only changes to the appliance.”

A typical configuration involves a pair of appliances, one local and one in the DR site, with pricing under $25,000. The HA appliance can protect up to 45 servers. Appliances come in a range with 1 and 2 U rackmount shelves or towers.

What applications and operating system environments can be backed up and restored by Quorum onQ? Two basically: Windows servers and RedHat Enterprise Linux 5.6 to 5.8.

Regarding competitors, the list probably includes all other cloud recovery suppliers such as Rackware, Unitrends and Zerto. A Quorum spokesperson mentioned Unitrends and claimed:

Who cares if they are authentic parts! Come to the iStore instead if you know what's good for you
Personal Tech27 Sep 2022 | 3

If you're gonna force everyone to register an account, at least protect that data, lawsuit argues
Cyber-crime27 Sep 2022 | 1