A chap called Guy Abbott has created a CAPTCHA that asks you to take a swing at imitating pointillist painter Georges-Pierre Seurat.

The CAPTCHA is available on the Contact Form on Abbott's site, which depicts an excerpt of Parade de Cirque, a painting in Seurat's famed pointillist style comprised of small dots of colour that when viewed from a distance form coherent images.

Below the image is a Flash app, paintseurat.swf, that offers you the chance to reproduce the painting. 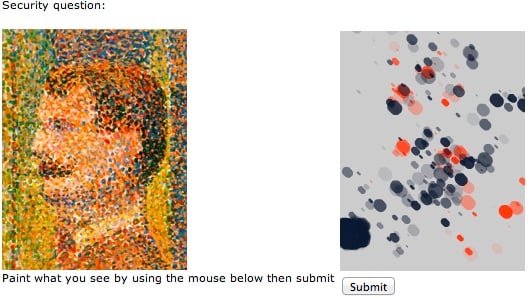 As the illustration above demonstrates, a mouse makes a poor substitute for a brush. And Vulture South should stick to writing.

The good news is that failing to reproduce Seurat doesn't kill off your chances of reaching Mr Abbott. Instead, you'll be offered another pointillism challenge that, while less daunting, is no less difficult to complete. Failing that challenge produces the warning "Your message has been sent to the Prime Minister who will be making some more cuts shortly."

Which sounds like perfect security. In an odd kind of way. ®