They read faster but write slower

The starting point was a three-product Ultrastar SSD800 line-up, maxing out at 800GB and coming in MH (write-intensive), MM (mainstream read/write balanced) and MR (read-intensive) variants. These were targeted at server and storage applications and came with 25, 10 or two full drives writes/day for the five-year warranty period respectively. That’s not changed and neither has the two million hours mean time between failures rating.

What has changed are the capacity, random IOPS and sequential bandwidth numbers.

The security options for these 12Gbit/s SAS interface drives include: 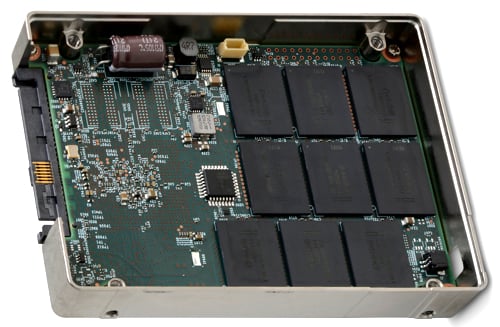 The NAND comes from Intel and is enterprise-grade eMLC. This is the same Intel that just launched its Pro 2500 notebook SSDs using 20nm SK Hynix MLC NAND.

The faster Ultrastar C15K600 disk drive spins at 15,000rpm and would seem to have its obsolescence brought closer by these new SSDs.

Fast-forward a year or so and we might see 3.2TB UltraStar SSDs making the C10K800 disk drive obsolete - or doing the same to its possible C10K1600 successor, unless there are significant TCO differences between them, such as the disk drives being much cheaper than SSDs for total cost of ownership/GB.

Concerning today’s news, HGST’s Ulrich Hansen, SSD product marketing VP, visited the quote cannery and fished this out: “As our OEM, cloud and enterprise customers implement solutions to meet a variety of storage needs, SSDs and HDDs will increasingly be deployed in tiered pools of storage based on respective TCO strengths. HGST is in a unique position of offering a complete enterprise storage portfolio with leading solutions in both product categories.”

You can get downloadable PDF spec sheets here – no registration required.

These new drives are currently completing qualifications at several server and storage system OEMs and are generally available now. ®