Impressively, there's no sign of bargain basement build quality, something that couldn't really be said of the first generation MeMO Pad 7. The whole thing feels as solid as a rock while the screen is made from some sort of toughened glass. The nicely rounded matt finish rear is rather pleasant to the touch too. 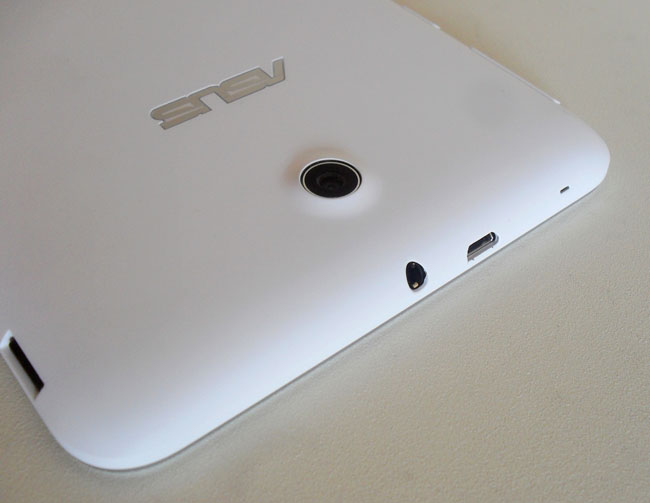 The only ergonomic hitch is the positioning of the power and volume buttons on the right. They are too much on the back rather than the side and don't fall easily to the touch, something exacerbated by the power button being below the volume rocker which feels the wrong way around to me. The memory card slot doesn't have a cover but cards slot far enough in for this to not be an operational problem.

The MeMO Pad apparently boasts two speakers (you can’t tell by looking) and they are both beefy little blighters and have a decent sized hole to play through, so sound is more than adequately loud and generally pleasant. For headphone users, the 3.5mm audio jack is at the top of the device next to the microUSB slot which is a sensible place to put both of them in my book.

The MeMO 7’s 3910mAh battery is a wee bit smaller in capacity than the Nexus 7’s 3950mAh cell, but the chipset and lower-res screen manage to eke more life from a full charge. Looping a 720p MP4 video with brightness and volume at 50 per cent drained the MeMO Pad in 9 hours 15mins, while the same test floored the Nexus 7 before it crossed the eight hour line. 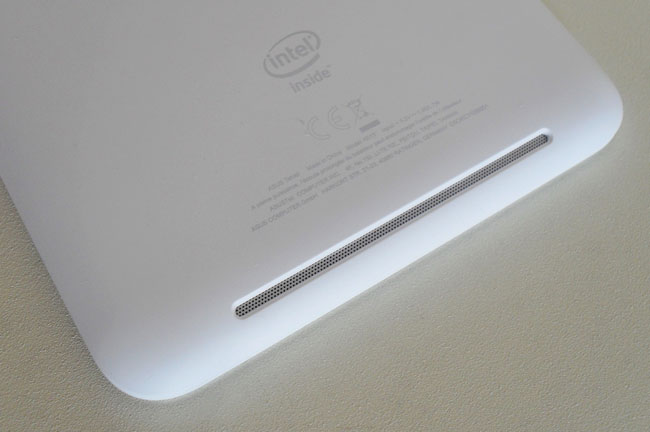 Two speakers, one grille and Intel inside

Another advantage the MeMO 7 has over the Nexus is storage. Granted it only comes in 8GB and 16GB flavours, but there is a memory card slot good for another 64GB and out-of-the-box support for USB On-The-Go hosting. While on the subject of connectivity, you also get Bluetooth 4.0 and 802.11b/g/n Wi-Fi at 2.4GHz. There’s no NFC chip but at the price that came as no shock.

Overlaying Android 4.4.2 is Asus’ new ZenUI launcher, and it's not a bad effort. It's light on its feet, easy on the eye and brings some handy widgets to the party like the What's Next widget that shows calendar events and the like on the home screen. ZenUI isn't ground breaking but it didn't have me running to the Play Store for a replacement either. Will the MeMO Pad 7 get an update to Android L? Yes. Do I know when? No.

On the photographic front, you get a 5Mp snapper at the back and a 2Mp unit at the front. There are a few built-in extras like digital image stabilisation and a best picture facility, all grouped under what Asus calls the PixelMaster system, which serves to boost the MeMO Pad’s photographic credentials above the mundane. 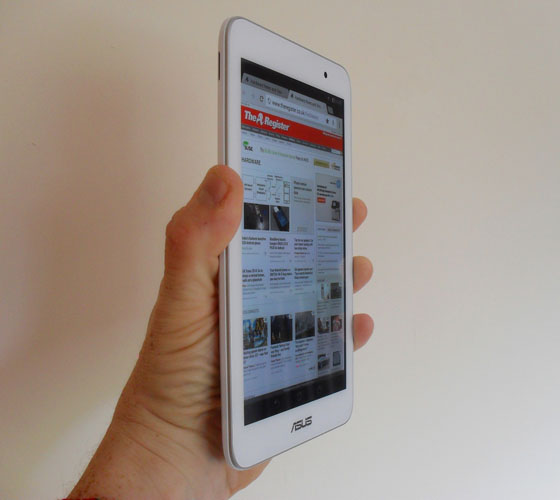 Fancy a hot 7-incher in your hands?

I took a quick snap inside the low-light interior of a private jet en-route to the BMW i8 launch and was pleasantly surprised how good the result was. Still, the apparent absence of autofocus (despite what the spec sheet says) puts the mockers on reading bar codes or shooting anything close up.

At £120, what’s not to like about the new MeMO Pad 7? It’s powerful, well made, frugal with power and has a pretty good camera for a tablet. The only criticism you can really make is that the screen resolution could be higher but in everyday use, that wasn't a failing I noticed. Oh, and it runs a wee bit hot sometimes.

So, is the MeMO Pad 7 really the best affordable tablet you can buy? Yes: it’s much cheaper than the LG G Pad 8.3 or Google’s Nexus 7 and feels more grown up than the Tesco Hudl. ®

Stick that in your named pipe and smoke it: Flaw in Citrix Workspace app could let remote attacker pwn host

We told you remote working is quite good, says Citrix as its numbers head higher