Facebook: Want to stay in touch? Then it's Messenger or NOTHING 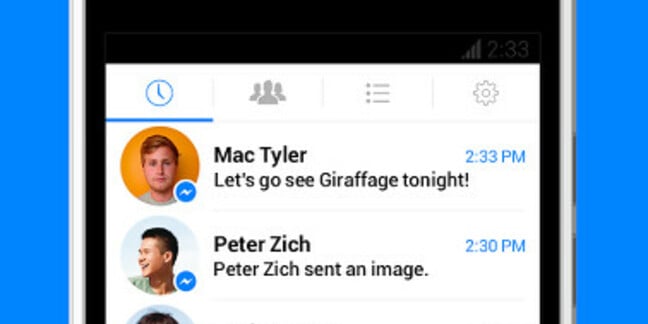 If you're used to sending messages to Facebook friends, enjoy it while you can – Facebook plans to kill the feature on mobile clients and force users to download its Messenger app instead.

"In the next few days, we're continuing to notify more people that if they want to send and receive Facebook messages, they'll need to download the Messenger app," a Facebook spokesperson told El Reg in an emailed statement.

"As we've said, our goal is to focus development efforts on making Messenger the best mobile messaging experience possible and avoid the confusion of having separate Facebook mobile messaging experiences. Messenger is used by more than 200 million people every month, and we'll keep working to make it an even more engaging way to connect with people."

Facebook announced back in April that it was going to make this move and has been using the time to refine the messenger applications and trying out the service in a few specific countries in Europe. Now it's going global and if you don't like adding a new application then tough.

The firm says it has improved Messenger so that the app is 20 per cent faster at delivery than the older system. It will allow free VoIP calls domestically and internationally and Facebook says it's much better at handling the sending of photographs and videos.

Judging from the response on Twitter a lot of users aren't happy about the change and are venting about it. But that always happens whenever Facebook changes anything and it remains to be seen if users will delete their iOS and Android Facebook apps and go back to web use, or move to the competition. ®