Shoots down aptitude of badness-slingers

Researchers at Toronto-based Citizen Lab have shot down denials by Syria, Bahrain and the United Arab Emirates regarding attacks against activists, journalists and dissidents, labelling some of the assaults as incompetent.

The team gathered tens of thousands of documents and files detailing the malware and social engineering attacks collected from open source intelligence and supplied by targets in the country.

Denials of attacks by the governments were rubbished by Citizen Lab's team, which detailed technical evidence of what they described as state-sponsored campaigns.

They found the attacks were not new and often borrowed tools from the cybercrime underground to spy on targets.

Some were so badly executed, having "multiple serious errors" concerning cryptography implementation and woeful operational security in binaries and command and control servers, that only basic countermeasures – including applying patches – were required to fend them off.

"We often find amateurish mistakes in either the attacker's technology or operations, indicating that energy spent countering these threats can realise significant benefits," the researchers wrote in the paper When Governments Hack Opponents: A Look at Actors and Technology [PDF].

"We develop strong evidence tying attacks to government sponsors and corporate suppliers, countering denials, sometimes energetic and sometimes indirect, of such involvement, in contrast to denials or claims of a corporate 'oversight' board. Our scanning suggests use of 'lawful intercept' trojans by 11 additional countries considered governed by 'authoritarian regimes'."

The researchers claimed they had evidence that Bahrain had flung the government-tailored FinSpy Trojan from April 2012 at five journalists covering the country from offices in the US and UK. They said these Trojans had attempted to steal Skype conversations, take screenshots and exfiltrate passwords to command-and-control servers. 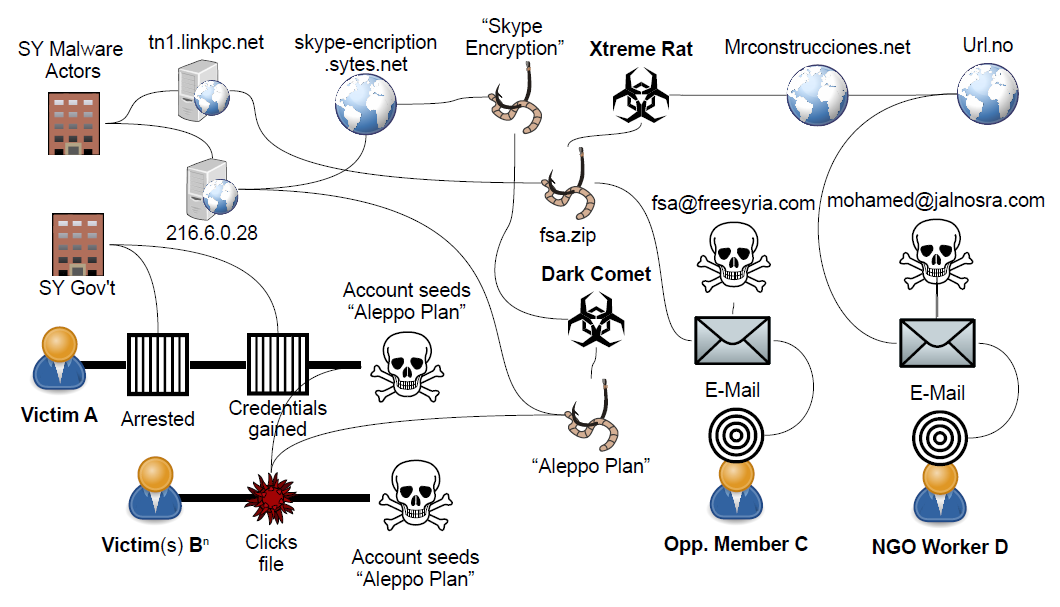 Citizen Lab also sent links to IPSpy in a bid to capture the IP addresses of activists and a Japanese trade union operating in the country.

The researchers claimed Syria was more thrifty in its the use of cybercrime remote access Trojan alternatives, which possess much of the capabilities of tools like FinSpy without the price tag. The paper alleged that most of the Syrian rebel's brass were "familiar" with Syrian pres Bashar Assad's digital assaults.

Citizen Lab claimed the UAE had deployed a mix of specialist and common Trojans to target activists and journalists that included Remote Control System, SpyNet and XtremeRAT.