Landing on a Red Planet near you in six years' time, hopefully

Pic NASA's next Mars rover will convert the Red Planet's atmosphere into oxygen – and collect rocks for return to Earth, see half a kilometre under the surface, and use stereo cameras to send back unprecedented snaps of the bleak world. 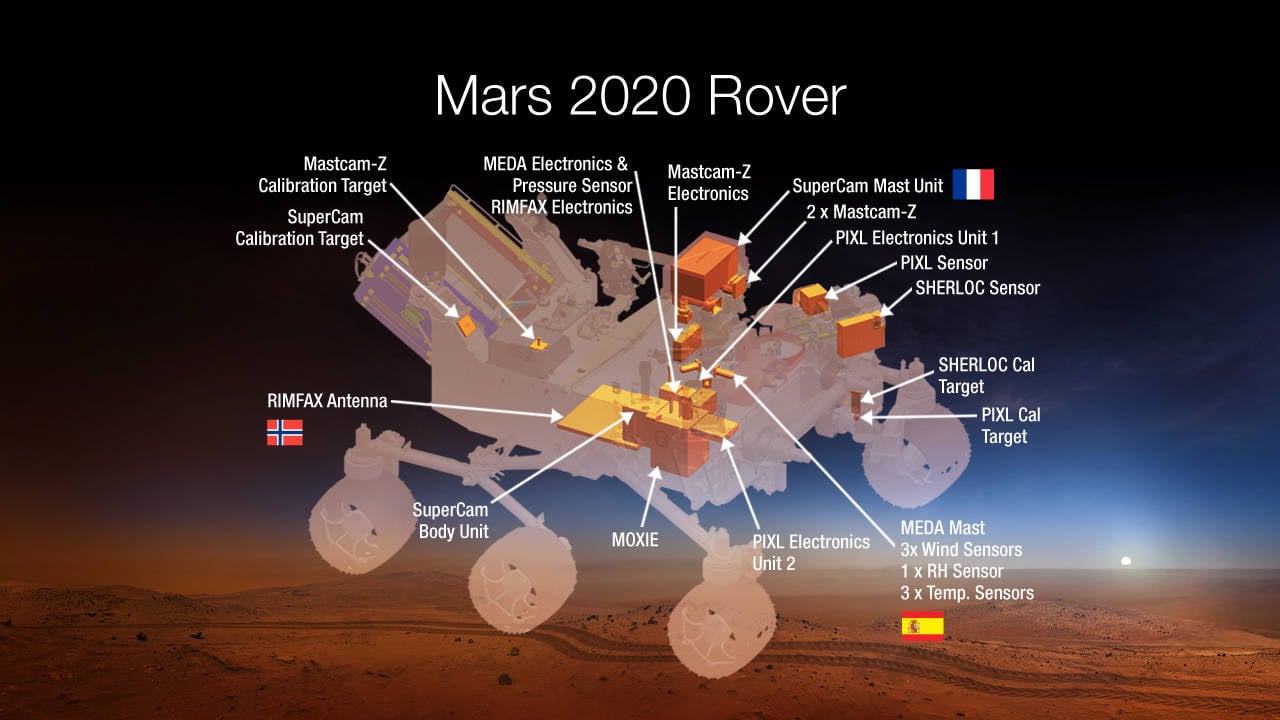 Curiosity v2.0 getting ready to roll (click to enlarge)

At a press conference on Thursday, the NASA team gave the first details of seven instruments onboard the new rover, which is set to land by 2020.

The droid will be an improved version of Curiosity, and the instrument packages will be tasked with finding evidence of past life on the planet and setting up systems that could allow humans to land and survive.

Also included in the new rover is a sample collection system allowing the machine to store drilling samples for future analysis.

Getting the sample cache back to Earth would be a huge challenge, but that's the point according to William Gerstenmaier, associate administrator for the human exploration and operations mission directorate at NASA.

"Unless we try hard things we're not going to get the really great science that we need to get from the surface," he said. "It's even possible that with the Mars 2020 rover some of the rocks that we interrogate look so intriguing that we will absolutely have to bring them back to Earth some day to use the best instruments available on Earth to determine whether these are signatures of life."

NASA won't be using the Mars 2020 mission to send samples back itself, although it does have plans to retrieve samples during a separate mission. Curiosity v2.0 will either hold onto its sample cache, or leave it behind for another mission, or possibly a human visitor, to pick up.

Seven tools for the future

The Mars 2020 rover will be very similar to Curiosity, using many of the same parts and designs. This allows NASA to save over half a billion dollars in costs, but even so it will cost about $1.9bn to get the 950kg package from here to Mars and employ a team to control it.

The seven instruments that Curiosity v2.0 will carry only account for $130m of the budget, but they are going to be crucial to the rover's mission. Some of the instruments will be upgraded versions of hardware fitted to Curiosity, but NASA has some new and powerful bits of kit to add on as well.

Today's Martian rover has twin cameras to give a stereo view of the landscape, but the Mars 2020 machine will carry a next-generation system, MASTCAM-Z, that will allow the cameras to zoom in on features. This will not only make picking out a route for the rover easier but will provide pictures that will "knock your socks off," said Michael Meyer, lead scientist of the Mars exploration program.

A second camera, dubbed SuperCam, will be used to take close-up images of rocks and mineral formations and scan them for signs of former (and maybe even current) life on the Red Planet. Supercam will work in concert with the Planetary Instrument for X-ray Lithochemistry (PIXL), a X-ray fluorescence spectrometer that can analyze rocks and dust in great detail.

A second spectrometer, the Scanning Habitable Environments with Raman & Luminescence for Organics and Chemicals (SHERLOC), will also be able to inspect rock samples using an ultraviolet (UV) laser – the first time such equipment has been sent to Mars.

The new rover will also carry its own weather station, dubbed the Mars Environmental Dynamics Analyzer (MEDA), which will measure temperature, humidity and wind speed. The Spanish-built instrument will also be able to analyze the shape and consistency of Martian dust particles.

Norwegian scientists are also building an instrument for the trip – the Radar Imager for Mars' Subsurface Exploration (RIMFAX). This powerful ground-penetrating radar will be able to peek up to half a kilometer down under the rover and give unprecedented access to Mars' geology as the machine rolls across the planet.

Finally, and most importantly for human exploration, is the Mars Oxygen ISRU Experiment (MOXIE). This instrument will try to extract oxygen from the horrible Martian atmosphere by breaking down carbon dioxide.

NASA said that if MOXIE worked it would enable a manned Mars mission to have oxygen ready and waiting when they arrived by sending remote oxygen generators to the surface ahead of time. The oxygen could keep future astronauts alive and be used for rocket fuel to power their return trip.

If it ain't broke

One of the key benefits of using an existing chassis is production cost reduction, but it also gives NASA a tried and tested way of running the mission.

The new rover will be lowered to the surface using the same skycrane technique that got Curiosity down. A four-rocket platform will hold the rover 20 meters over the Martian surface, lower it down, then release and crash a safe distance away.

But some improvements will be made to the design, based on what NASA has learned from the first mission. In particular the rover's wheels will be a totally new design, as the current set are causing problems.

Curiosity is having real trouble with its wheels. Rocks on the Martian surface have gouged holes in the aluminum wheels and the rover is being driven in reverse sometimes to spread out the wear and tear.

NASA is testing out new, tougher alloys for the wheels on the Mars 2020 rover. It is also looking at how to design them so that if tears do occur, they won't spread further and incapacitate the vehicle.

When Curiosity v2.0 touches down, assuming the seven minutes of terror system works, then it will be an important step in opening up Mars for human exploration, NASA said: the 2020 rover's predecessor has shown Mars had an atmosphere that could have supported life. The new space tank will now try to find it. ®