We sent a probe SIX BILLION km to measure temperature of a COMET doing 135,000 km/h

FYI, it was -70 degrees celsius

The comet-chasing spacecraft Rosetta has got close enough to its target to start getting temperature readings. The results show that comet 67P/Churyumov–Gerasimenko isn't the snowball some boffins were expecting.

Between 13 and 21 July Rosetta moved within 5,000 kilometers of the rapidly spinning comet and used its visible, infrared and thermal imaging spectrometer (VIRTIS) to determine the temperature. Rosetta has had to travel more than 6 billion kilometres (3.7 billion miles) to reach it.

The data suggests the comet doesn't have an icy surface, but instead has a dark crust of dust over an icy core. As the comet approaches the Sun it will heat up and some of this dust could be ablated to reveal more of the comet's geology to the European Space Agency scientists back here on Earth. 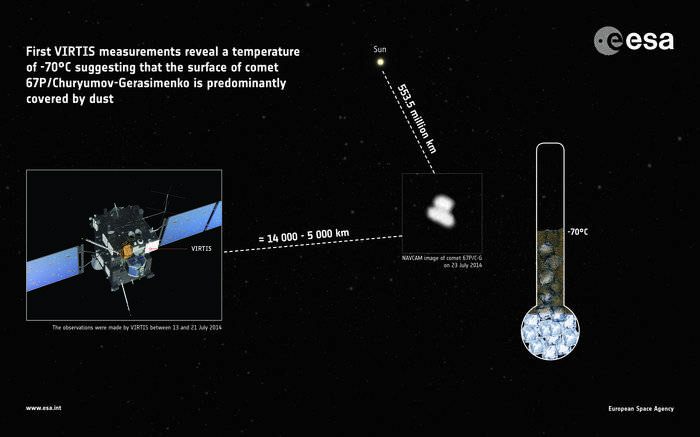 "This result is very interesting, since it gives us the first clues on the composition and physical properties of the comet's surface," said VIRTIS principal investigator Fabrizio Capaccioni. "This doesn't exclude the presence of patches of relatively clean ice, however, and very soon, VIRTIS will be able to start generating maps showing the temperature of individual features."

Rosetta is now closing to within a few hundred kilometers of comet 67/P and getting into its final orbit around the body, the culmination of a ten-year trip. The probe will then start mapping out the comet in preparation for sending down its Philae lander.

When the landing spot has been found, Philae will detach from Rosetta and power down towards the surface at one metre per second, and fire harpoons into the comet to tether itself to the surface. After touchdown the lander will use its suite of instruments to determine the exact chemical composition of the comet and its internal geology.

The discovery that the comet has a dusty outer surface may cause concerns that the performance of Philae's solar cells could be degraded. The lander will have enough internal power to conduct a couple of weeks of operations, but if its solar panels can pick up enough sunlight that could be extended to months of good science.

Rosetta, Philae, and the comet itself are now approaching the Sun and the instruments will monitor how the object reacts as it heats up. The comet is so far away from the Sun that it is getting only a tenth of the sunlight we enjoy on Earth, but it will swing much closer to the star's warmth before heading back out into the universe with its human-built cargo.

The 4-kilometre-wide space rock moves around the Sun between the orbits of Jupiter and Earth at up to 135,000 kilometres per hour (83,890 miles per hour). It's 403 million kilometres from our world right now, and it would take about 22 minutes for a signal from the rock to reach home.

"Combined with observations from the other 10 science experiments on Rosetta and those on the lander, VIRTIS will provide a thorough description of the surface physical properties and the gases in the comet's coma, watching as conditions change on a daily basis and as the comet loops around the Sun over the course of the next year," says Matt Taylor, the European Space Agency's Rosetta project scientist.

"We are excited to start analyzing this fascinating little world in more and more detail." ®