BiTMICRO has entered the enterprise PCIe SSD market with the MAXio E-Series SSD with the best capacity-per-watt among all PCIe SSDs, using less than 30W when active.

The usable capacity is adjustable and the actual number varies based on the over-provisioning percentage and drive formatting. BiTMICRO has its own proprietary controller. We would assume from this that the endurance varies also. 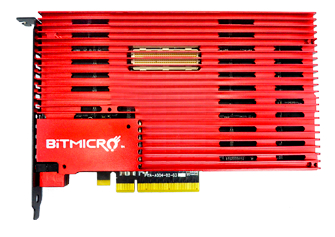 BiTMICRO’s VP of Engineering, Bharadwaj Pudipeddi, says: “You can see the bandwidth is not much different from random read/write, as the drive has been particularly optimised for random traffic, high capacity, and high endurance.”

We asked him how these MAXio E-Series products compare to similar capacity products from Fusion-io, Micron, Intel, Toshiba and Seagate/LSI?

Pudipeddi said: “Our technology has the best capacity per watt with PCI-class performance and have a consistent low host burden. This is realisable to the end consumer as a true advantage at higher capacities. The lowest capacity we offer is 1.5TB (which is either the highest end with some product lines or middle-of-the-range with other product lines)."

Then he dropped a pleasant capacity surprise: "Our E-Series range goes all the way to 6TB with the same Gen2 FF working within the same 30W budget. We can pull this off due to our ASIC-based architecture which separates the controller ASIC (running the FTL) from the expansion ASICs (which have the ECC decoders and interfaces to the flash). The expansion ASIC is only 300 mW. This allows us to add 1TB of incremental capacity for only an additional 1W. To scale capacity, we simply scale the number of expansion ASICs with a tree topology.” 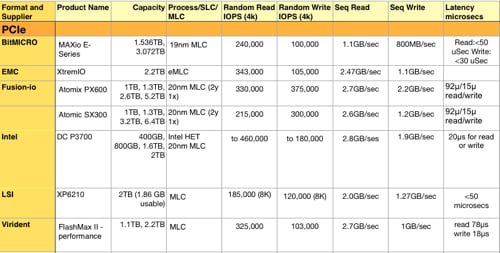 The comparative table above shows that the MAXio line isn't the greatest random IOPS product, being competent but not amongst the highest performers. The same is true for sequential IO, where several products out-perform it. However, having an upper level of 6TB of raw capacity is pretty good. Who knows – it might grow larger in the future.

Pudipeddi added this: ”We also have a high performance play that is again more efficient than the other players. Since our controller is an ASIC which is not limited by [the] load of the ECC decoder, we can scale the number of controllers with low cost and lower power than the others do.”

Finally, Fusion and Virident run FTL (Flash Translation Layer) on the host. Pudipeddi said: “We offload most of the FTL to the quad-core controller ASIC while still being flexible for new features. This keeps our host burden consistent regardless of capacity and performance.”

The MAXio comes with a standard three-year or extended five-year warranty and is said to be targeted at video-on-demand, video streaming, in-memory analytics, non-linear editing, gaming, file servers, web applications and cloud services use-cases. It can be checked out at the Flash Memory Summit, 5 to 7 August at the Santa Clara Convention Center, booth 727. ®