'They were pretty much obliterated' – report

The US military held a series of online war games to pit reservist hackers against its active-duty cyber-warriors – and the results weren't pretty for the latter, we're told. 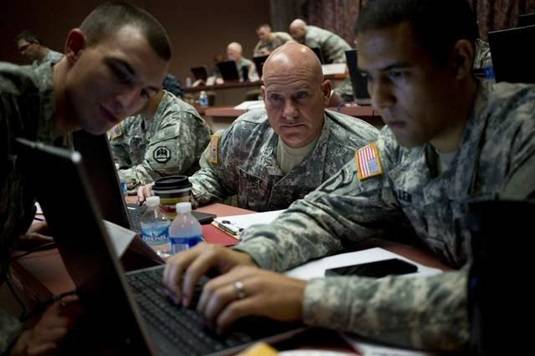 "Have you tried turning it off and then on again?"

"The active-duty team didn’t even know how they’d been attacked. They were pretty much obliterated," said one Capitol Hill staffer who attended, Navy Times reports.

During the games, which took place in a compound at US Cyber Command (CYBERCOM) headquarters at Fort Meade, serving members of the military's online task force struggled to defend their network against attacks by several units of reservists, many of whom have day jobs as IT security specialists. The final results remain classified.

Since 2009 CYBERCOM has been training about 6,000 full-time soldiers to protect US networks against attack and to carry out offensive operations on overseas networks. Based on the above report of these latest war games, CYBERCOM still has a lot of work to do; the results may provoke a rethink of how the nation's cyber-warriors are trained and assembled.

The original plan was to draw 80 per cent of CYBERCOM's forces from the serving army, and the remaining 20 per cent from reservists. Given the skills shown by America's part-time military in the cyber-bout, held last year, this could be about to change.

“It defies common sense to think that industry, in particular our high-tech industries, are not moving at light speed compared to the way government works," said Arnold Punaro, chairman of the Reserve Forces Policy Board.

While the military is ploughing billions into cyber-warrior training, it's only to be expected that people working outside the military have more infosec experience than those in the armed forces, and be more aware of the very latest defense and offense techniques.

But there are other problems. In May FBI Director James Comey came under fire for telling the White Collar Crime Institute's conference that the agency must consider relaxing its drug testing rules and other recruitment policies if it's to get the best online security talent.

“I have to hire a great workforce to compete with those cyber-criminals and some of those kids want to smoke weed on the way to the interview,” he said.

He later rescinded his comments, saying he was joking, but judging from the air quality at DEF CON's unofficial parties there are plenty of hackers who enjoy a good toke, and meddling with their brain chemistry in new and (depending on your state) illegal ways.

Convincing these people to sign up and help their nation's defenses will be a tough sell indeed. But, based on the performance of active-duty cyber-warriors in last year's games, they are sorely needed. ®