Watch live After a 10-year-long chase of the pleasingly duck-shaped "67P", the European Space Agency’s Rosetta probe has become the first spacecraft in history to rendezvous with a comet.

“After 10 years, five months and four days travelling towards our destination, looping around the Sun five times and clocking up 6.4 billion kilometres, we are delighted to announce finally ‘we are here’,” says Jean-Jacques Dordain, ESA’s Director General.

“Europe’s Rosetta is now the first spacecraft in history to rendezvous with a comet, a major highlight in exploring our origins. Discoveries can start.”

The record-setting probe is now circling Comet 67P/Churyumov-Gerasimenko around 405 million kilometres from Earth, or halfway between the orbits of Jupiter and Mars. The space rock is rushing towards the inner Solar System at nearly 55,000km an hour and lies in an elliptical 6.5 year orbit that takes it from out beyond Jupiter to between Mars and Earth at its closest to the Sun.

Rosetta will be by the comet’s side for the next year as the pair swing around the Sun and back out towards Jupiter, after an already epic journey to get this far. 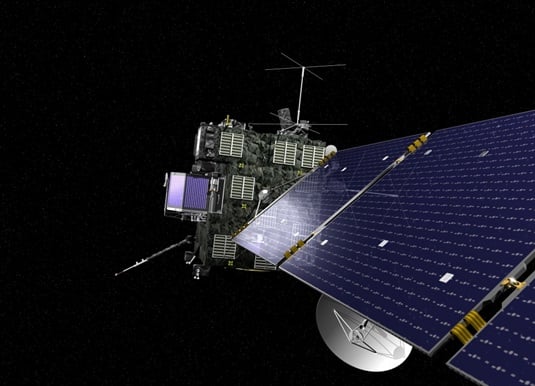 The comet-catcher launched in 2004 and has had to make three gravity-assist flybys of Earth and one of Mars to help it slingshot towards the 67P. The pingball-course also allowed Rosetta to swing past asteroids Šteins and Lutetia, grabbing unprecedented observations and data, but it came with a host of dangers. The Martian flyby alone saw the craft get as close as 250km to the surface of the planet and spend nearly a solar-battery-life-time on the dark side of the Red Planet.

Even today, so close to its goal, Rosetta still had to complete the last in a series of ten manoeuvres that started in May to adjust its speed and trajectory to match the comet’s. Any slip-up in its moves could have seen the craft simply fly past the space-rock and out into space.

“We have come an extraordinarily long way since the mission concept was first discussed in the late 1970s and approved in 1993, and now we are ready to open a treasure chest of scientific discovery that is destined to rewrite the textbooks on comets for even more decades to come.”

Now, Rosetta is just 100km from the surface of 67P, but it plans on edging closer still. Over the next six weeks, it will describe two triangular trajectories in front of the comet, getting as close as 50km away. The passes will get Rosetta’s instruments, which have already been taking readings as the probe caught up to 67P, to get more detailed scientific measurements.

At the same time, Rosetta will be scouting for a spot for the Philae lander – its robotic companion that ESA is hoping to touchdown on the surface of the comet this year.

“Arriving at the comet is really only just the beginning of an even bigger adventure, with greater challenges still to come as we learn how to operate in this unchartered environment, start to orbit and, eventually, land,” says Sylvain Lodiot, ESA’s Rosetta spacecraft operations manager.

As many as five possible sites will be chosen by late August before a primary site is selected in September. The final timeline for Philae’s deployment is expected to be settled by the middle of October for a potential launch in early November.

“Over the next few months, in addition to characterising the comet nucleus and setting the bar for the rest of the mission, we will begin final preparations for another space history first: landing on a comet,” says Matt Taylor, ESA's Rosetta project scientist.

“After landing, Rosetta will continue to accompany the comet until its closest approach to the Sun in August 2015 and beyond, watching its behaviour from close quarters to give us a unique insight and realtime experience of how a comet works as it hurtles around the Sun,” he added. ®