Nuts to your poncey hipster coffees, I want a TESLA ELECTRO-CAFE

Indie cafe 1: Large soya latte, please. Am told they don’t do them in large. They weren’t wrong – drink is served in a vessel smaller than a single-portion tub of cinema ice cream. It costs £3.10 and smells like someone set fire to squirrel shit.

Indie cafe 2: Large soya latte, please. They don’t do soya. By the look of the waxed paper thimble it comes in, they don’t do large either. Nor apparently do they keep any change in the till. Thimble of coffee goes cold while barista ambles off to newsagent.

Indie cafe 3: Large soya latte, please. Drink arrives in an espresso cup. Suggest that barista has made a mistake. Barista shrugs, tips it into a larger cup and hands it back to me.

Indie cafe 4: Large soya latte, please. Yes, they do soya, am told, but they don’t have any at the moment. Insist that from the point of view of someone who has just asked for a soya latte and can’t get one, this is the same as not doing soya. Blank stares.

Indie cafe 5: Large soya latte, please. Am served a cup of froth. Virtually weightless. Cup needs to be held down with a stapler to stop it floating off my desk.

Indie cafe 6: Large soya latte, please. Back in the office, discover they took me literally and served me a big cup of hot milk. Very nice but feel sleepy all morning and at lunchtime nip out to Boots for some rusks.

First-world problems, eh? This is what it is like to ‘support your local independent coffee house’ – stumbling from one bunch of hopeless clowns to the next in an ultimately doomed hunt for a decent morning beverage.

Long-term readers of this column – you may wish to refer to yourselves as ‘repeat offenders’ – may remember how last year I nabbed 2,200 square feet of cut-price office space in London’s so-called Tech City. I lived the dream, rode the curl and tripped the shite fantastic, then grew royally bored with earning a living by recounting clichés and took my leave. Two enduring memories abide with me from my year in hipster Hoxton: the net access infrastructure in London’s Tech City is utter pants (despite ignorant pontificating by a nob-end mayor) and the coffee is much, much worse. 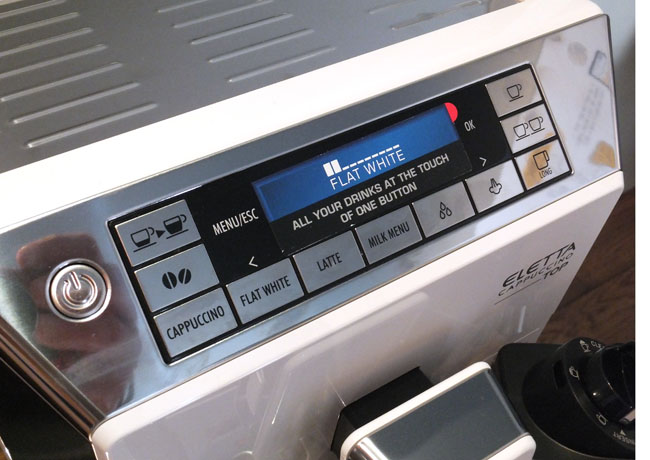 Now, if only they'd add a Wi-Fi button, we'd be sorted

One might expect indie coffee house culture and connected-device culture to converge in a place like this. After all, about two thirds of the businesses round here are app startups, fintech pioneers or cloud dev investors, while their entrepreneurial employees make a point of expressing their hip independent credentials by uniformly growing Edwardian beards and getting David Beckham haircuts. But if you wander into almost any of these indie cafes and ask for their Wi-Fi password, you’ll be met with anything from bafflement to scorn.

In this happening centre of tech excellence, it seems, offering crap coffee and bugger-all internet access is effectively a badge of honour. There’s even one place that has a hand-chalked sign outside with which it presents slippery slogans such as ‘No Wi-Fi! Talk to each other!’

Intrigued by this invitation, I took them up on this offer, ordered a cup of frothy sick and a pastry so old it must have been unearthed during an archaeological dig and did my best to initiate what turned out to be a series of disappointingly one-sided conversations with strangers sitting at adjacent tables. I began by leaning over to talk to people and even tried sitting next to them, announcing: “So, talk to me!” For some reason I cannot fathom, they did not seem to be interested in keeping the conversations going. It was as if they preferred to mind their own business and get on with what they were already doing. Some of them were even reading books, for heaven’s sake! What were they thinking of? Hadn’t they seen the sign outside?

Next page: Caged and confused
Page:
Tips and corrections
132 Comments

Psst... Wanna buy some stock in a spaceplane company? Virgin would like a word

Roundup Also: China trumpets the return of its new capsule and Cygnus has left the station

Ashton Kutcher breaks up with pizza slice for spreadsheets