Is that an ARMADILLO in your PANTS or are you just pleased to see me?

We invite readers to raise a glass or two today to autopilot wrangler Linus Penzlien, who touched down in Spain yesterday afternoon ahead of an intensive week of Vulture 2 spaceplane Pixhawk custom parameter programming and testing.

And here is the man himself meeting local lass Ruperta this morning ahead of an intensive codefest: 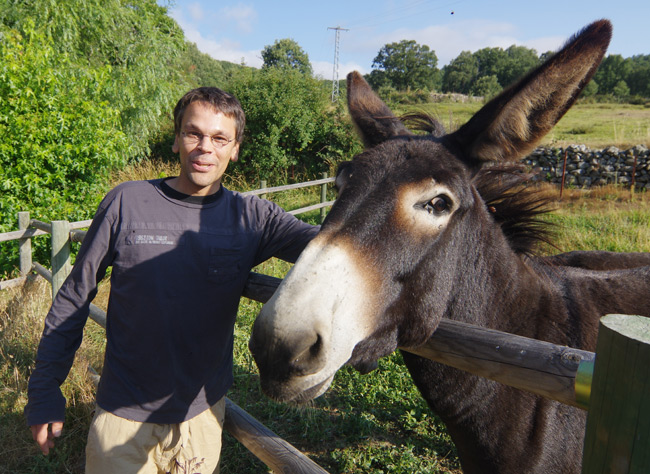 As we reported last week, the parameters include an "ascend wait" mode, wherein the Pixhawk twiddles its thumbs while the fantastical flying truss launch platform soars to motor ignition altitude, "launch detect" and subsequent autopilot activation into flight mode coding and, most ambitiously, a magnetic tree detection and emergency avoidance algorithm.

Recently, we used the Vulture Central mainframe to run some simulated High Altitude Ballooning (HAB) missions. In 99.92 per cent of cases, anything falling from the sky following balloon burst ended up hitting a tree.

Sensationally, when we simulated some HAB flights over Mars, 11 per cent of payloads also ended up entangled, even though the Red Planet doesn't actually have any trees.

Evidently, dark and mysterious forces are at work, but we're determined our Vulture 2 will be fully armed to defend itself against arboreal magnetic attraction.

Andrew has provisionally created APM parameter MAG_TREE_AVOID, but in the spirit of LOHAN we're going to need a snappy acronym for this advanced capability.

We know you lot like a a bit of acronym tomfoolery, so stop whatever paid work you were doing and get stuck into this vital challenge. ®