Sorry, Harvard, did you say kilobots or KILLER BOTS?

Vid Harvard University computer scientists have built a 1,000-strong robot army that can form itself into shapes with little human input. 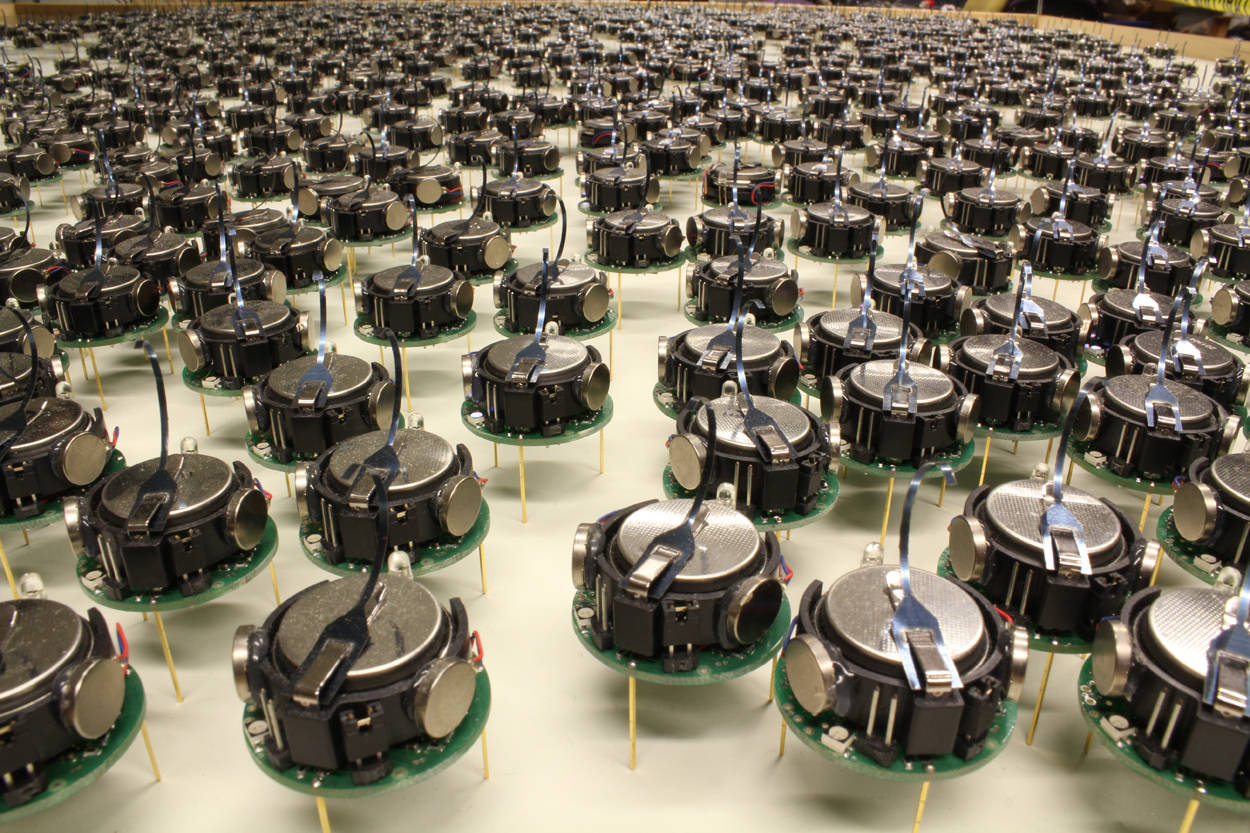 And I, for one, welcome our new robot overlords (click to enlarge)

The machines, dubbed kilobots because there are 1,024 of them, each contain an Atmel micrcontroller, two vibrating motors powering rigid legs that allow them to skitter across smooth surfaces, and an infrared emitter-sensor pair to receive commands and communicate wirelessly. They can form into various shapes, including a starfish and the letter K, according to a paper to be published in Science.

The researchers beamed into the droids images of the forms they wanted the robots to take. Four robots act as stationary anchor points and the rest of the kilobots organize around them by communicating with their peers and moving along the edge of the swarm until they are in the correct position.

The team took their inspiration from the way ants, termites, and swallows cooperate in nature. By mimicking biological systems the team hopes to develop artificial intelligence systems that could be used to organize more advanced robots.

"Increasingly, we're going to see large numbers of robots working together, whether its hundreds of robots cooperating to achieve environmental cleanup or a quick disaster response, or millions of self-driving cars on our highways," said Radhika Nagpal, Fred Kavli Professor of Computer Science at the Harvard School of Engineering and Applied Sciences (SEAS).

"Understanding how to design 'good' systems at that scale will be critical. We can simulate the behavior of large swarms of robots, but a simulation can only go so far. The real-world dynamics—the physical interactions and variability—make a difference, and having the Kilobots to test the algorithm on real robots has helped us better understand how to recognize and prevent the failures that occur at these large scales."

Nagpal's robo-swarm has been in development for a few years now – the video below shows the mob previously pushing stuff around in a totally non-terrifying way – but the paper published tomorrow will detail how her team corralled more than a thousand bots at once.

Youtube video of the robots swarming to move things

The team has published the robots' mechanical blueprints, schematics, microcontroller firmware and other software – and it hopes others will take the idea forward. So if there's a budding megalomaniac with plans for world domination out there, it's time to get cracking. ®