That browser toolbar your Mum swears she never installed? Chrome'll crimp it

Google is planning to roll out an update to the Safe Browsing feature of its Chrome web browser that will alert users to a new category of suspicious downloads: ones that look like they're installing helpful software but could also include additional, unexpected payloads.

Safe Browsing already issues alerts to known malware downloads based on a database of file signatures maintained by Google. But with the new update, the service will also flag files that are more of a grey area.

Say, for example, you want to download the latest version of some open source software, such as the Firefox web browser. If you're like the typical PC user, you might go to a search engine like Google and enter "Firefox." Typically, a download link will be the first result that shows up.

The trouble is, these download links aren't always the official websites of the software's creators. Sometimes they're links to third-party download sites, and while these sites do offer the software you were searching for, they often bundle something extra in the download, such as unwanted browser toolbars, adware, or scripts that change your homepage or other settings.

Even worse, occasionally these download sites might take ads out with Google Search that include "Firefox" and other software products as keywords. As a result, these ads actually show up in the search listings before the products' legitimate download sites, which explains why so many neophyte users click on them.

El Reg has asked Google for clarification on its policy toward such ads, but Mountain View has yet to respond. 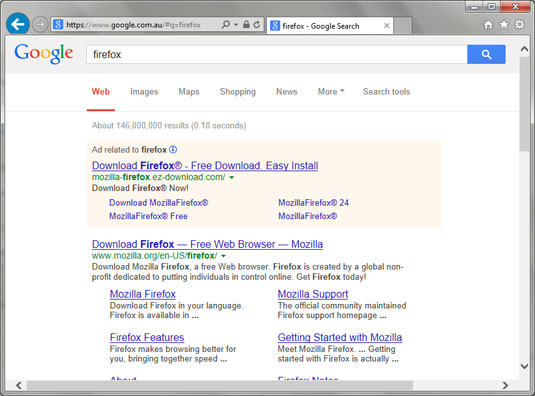 Watch out for the one in yellow: Google ads lure unsuspecting search users to dodgy downloads

Mozilla has actually been aware of this problem for a while. An entry on the nonprofit's bug reporting database suggests that these deceptive download sites might be violating copyrights or trademarks by bundling unwanted software with legitimate downloads, but despite being opened in early 2013, the issue remains unresolved.

"We're ... consulting with outside counsel on options," Mozilla spokeswoman Liz Compton said in a comment on the bug filing in June 2014. "This isn't a legal bug so we can't say much here about legal strategy, but we aren't ignoring this situation and are working on it."

Yet if Mozilla is having trouble coming up with a legal solution to deceptive downloads, Google's technical solution may mean it doesn't have to.

"We'll show a warning in Chrome whenever an attempt is made to trick you into downloading and installing such software," Google security staff engineer Moheeb Abu Rajab explained in a blog post. "(If you still wish to proceed despite the warning, you can access it from your Downloads list.)"

Google also makes its Safe Browsing technology available for other browsers to use, including Firefox, and Mozilla seemed optimistic about the new changes.

"We are happy to see that Google is continuing to improve its detection of potentially unwanted software, especially since Firefox relies on Google Safe Browsing to block malicious downloads," a Mozilla spokesperson told El Reg via email. "We are investigating implementing this new extension, especially if it reduces unofficial rebundled software that targets Firefox and other well-known publishers through Google search ads."

Google says it will activate the new deceptive software detection features of its Safe Browsing service beginning next week. ®