Boffins build CYBORG-MOTHRA but not for evil: For search & rescue

Video Scientists at North Carolina State University in the US have implanted electrodes in a developing moth to closely observe and remotely control the creature's flight. 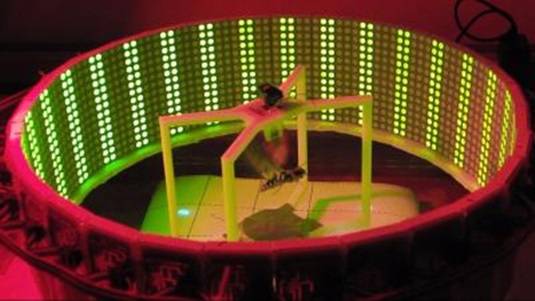 Cyborg moth takes to the wing

In a paper published in the Journal of Visualized Experiments, the lead author Dr Alper Bozkurt, an assistant professor of electrical and computer engineering, described how the electrodes were implanted into the thorax of a moth as it metamorphosed from a pupa to a winged insect. As the Manduca sexta moth changed, the electrodes stayed in place and started sending back data on the insect's muscle functions.

To map these observed electrical signals to actual movement, the moth was suspended on a platform that was levitated by electromagnets to allow the creature a certain amount of freedom to move. The team then recorded the muscle signals as it flew left and right to see how it coordinates itself in the air and track how such impulses could be fed back into the creature.

"By watching how the moth uses its wings to steer while in flight, and matching those movements with their corresponding electromyographic signals, we're getting a much better understanding of how moths maneuver through the air," Dr Bozkurt said today.

"We're optimistic that this information will help us develop technologies to remotely control the movements of moths in flight. That's essential to the overarching goal of creating biobots that can be part of a cyberphysical sensor network."

The focus of the research is to slave biological organisms like moths into what the team calls biobots, that can be directed by sending impulses to the insects' wing muscles. The team reported that the implantation process was surprisingly simple, and the moths appeared to suffer no ill effects from the procedure. The next stage is to build wireless controllers to stimulate flight muscles to a human overlord's commands.

"In the big picture, we want to know whether we can control the movement of moths for use in applications such as search and rescue operations," Dr Bozkurt said. "The idea would be to attach sensors to moths in order to create a flexible, aerial sensor network that can identify survivors or public health hazards in the wake of a disaster." ®

We won't leave you hanging any longer: Tool strips freeze-inducing bugs from Java bytecode while in production

IE under fire, Triton goes under the microscope, and Norsk Hydro reeling from ransomware attack

Plus, Minnesota and North Carolina cities hit by hackers