What a pain in the mass! Euro craft Rosetta to poke its probe in 10-BILLION-tonne comet

Sun puts 67P/Churyumov-Gerasimenko on a diet

Vid The European Space Agency's Rosetta probe has made the first measurement of the mass of the comet it's chasing – and has come up with a mass of 10 billion tonnes, plus or minus 10 per cent. 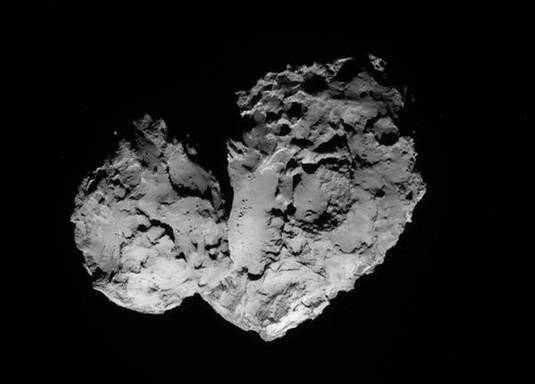 Does my mass look big in this?

Rosetta has spent the past ten years, and six billion kilometres, getting up to speed with comet 67P/Churyumov-Gerasimenko as it falls sunwards. The spacecraft is now just 50km from its prey and made its measurement using the gravitation pull of the hurtling rock.

The team are scrutinizing the readings, and could refine the mass value as the probe gets closer to its target in the coming weeks, ESA said in a blog post.

"In order to be able to navigate the spacecraft close to the comet, ESA's flight dynamics and operations teams have also independently determined the mass and gravity parameters. These values fall within the same range as those derived by the radio science investigation team," the agency explained.

Comet 67/P is a big old thing at 3.5 by 4 kilometres wide – or to use the Reg standards converter, it's 29 by 25 Brontosauruses. The mass measurement from ESA shows that the comet isn't that dense, indicating that it may have significant amounts of water and hollows inside.

We won’t know for sure however until October. If all goes to plan, the Rosetta probe will make history when its Philae lander harpoons comet 67/P and anchors itself to the surface. Once there, it will use ground-penetrating radar, drilling equipment, and an on-board science laboratory to tell us more about this wandering snowball.

Getting these early measurements in quickly is also important because the comet has started to slim down: as it approaches the Sun, the comet is shedding liquid as vapor, and will lose a lot more as it heats up.

The ESA has created a handy solar system map so the public can follow the comet's course, and there's a chance that if the comet heats up enough it will be visible with basic astronomy equipment. We shall wait and, hopefully, see. ®