Cheap storage array IOPS and lots of them

If you need cheap storage array IOPS and lots of them, Fujitsu's DX600 S3 array can deliver those goods – at least according to an SPC-1 benchmark.

The Storage Performance Council (SPC) is an industry group dedicated to producing objective and vendor-neutral benchmarks to enable meaningful performance comparisons to be made between arrays. Its SPC-1 test simulates business-critical applications processing many complex transactions.

According to the tests, Fujitsu's ETERNUS DX600 S3 array trounced mid-range array competition in the sheer IOPS stakes, recording 320,206.35, and coming second to a 3PAR 7400 with its $1.54/IOPS cost - based on list pricing. The HP number was $0.58, though the difference might well be lost once street and/or bid pricing gets to work.

The DX600 S3 was fitted with 18TB of flash, that's 45 x 400GB MLC SSDs, and you can check out the config details here. We stuck them in a spreadsheet along with others and graphed 'em: 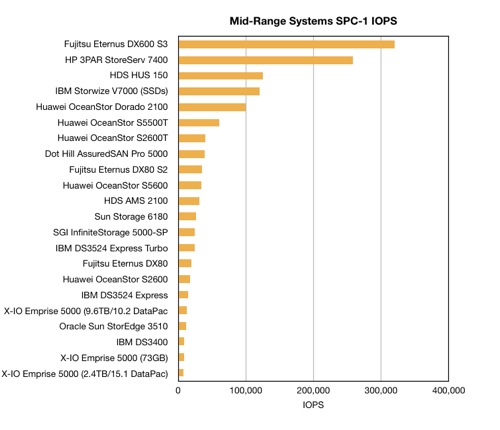 Interestingly, although the DX600 S3 came eleventh in the overall SPC-1 rankings, it was number 1 in average response time at the 100 per cent load level – being the fastest-ever responding box in the SPC-1 lists we maintain.

Here is the cost/IOPS chart: 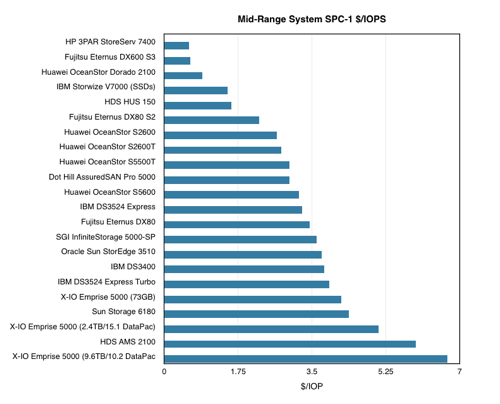 The "net net" of the result is that all-flash systems fly on SPC-1 benchmark runs and disk-based systems haven't a prayer of competing in the IOPS and $/IOPS comparisons.

The DX600 S3 can support a mix of disks and SSDs, so Fujitsu classes it as a hybrid array. Get the all-flash version if you want a mid-range storage racehorse. ®