Comment Thin-skinned media “guru” Professor Jeff Jarvis is furious about the acclaimed satirical Twitter account created by an English ex-pat techie in his name, which has built up a cult following. Jarvis claims his satirical alter-ego is damaging his reputation.

The real Jarvis, author of the book What Would Google Do? describes himself modestly as “the media pundits’ pundit”, and boasts over 140,000 Twitter followers.

Meanwhile, the @ProfessorJeffJarvis account, created by Rurik Bradbury, CEO of e-commerce startup Trustev, has a devoted cult following of around 11,000. The account posts a selection of almost-but-not-quite-completely-unbelievable tech mumbo jumbo, such as these pearlers:

Nevertheless, the “real” Jarvis has finally had enough:

“You have affected my reputation with people I know… You are using my identity to harm my reputation,” adding, menacingly: “And I've fucking had enough of it. You've had your fun, mate.”

The real Jarvis revealed his inner anguish by comparing his position (of being satirised) to the vicious abuse received by Robin Williams’ daughter online recently – the satirical account was a “tormentor” and a “troll”.

What tipped Jarvis over the edge? Ironically, it was Nicholas Taleb, a man almost as pompous and humourless as Jarvis himself, who lit the professor’s short fuse.

Taleb briefly debated with the faux guru before blowing up, in spectacular style. 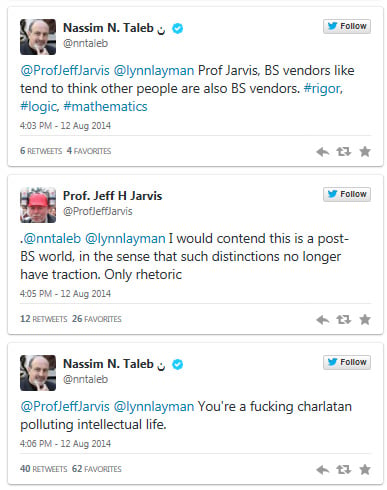 Fuller accounts are available on Slate (here) and on CNBC, available here.

Jarvis’ absurd overstatements were the inspiration for the account, as Bradbury acknowledged in an interview with Business Insider, thanks to quotes such as "Each time you don’t share, a relationship loses its wings."

But the accounts have become a composite of several ‘thinkfluencers’ (such as Clay Shirky, Seth Godin and others) and spawned its own rich neologisms (herdsourcing, nextification, the mogadishu:reinvent un-conference, et cetera)

Bradbury says, as a goodwill gesture, that he’ll “pivot” away from using Jarvis in the parody account's name, and is “herdsourcing” an alternative – and he welcomes suggestions.

Rainbow Nation - a meeting of blogging Thinkfluencers - including Jeff Jarvis - in all its glorious diversity, from 2004

The real Jarvis' belated hissy fit isn’t really out of character. As Bradbury says, what “gurus” such as Jarvis and Shirky (and a clutch of attention-seeking academics too) are really doing is intellectual bullying. It’s designed not to appeal to reason or ethical beliefs, but to fears and insecurities. So it shouldn’t be a surprise the gurus and thinkfluencers exhibit so much paranoia and insecurity themselves. Many appear to be stuck, emotionally, somewhere in their early teens.

Then again, eras of change always attract opportunists. When times are happier, and business is profitable, you don’t need to employ a guru to tell you everything you’re doing is wrong. ®