Best shot: Coffee - how do you brew?

Different ways to get that essential lifegiving goodness 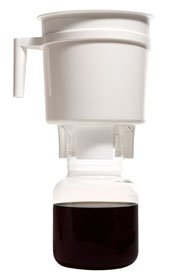 There's an air of Camp about cold brewing. As the name suggests, cold brewing involves letting the grounds steep in water, for several hours - so it's not a solution if you want a fix right now.

The end result is a concentrated coffee which, aficionados claim, lacks the acidity of coffee produced with hot water. You can keep a batch of concentrate in the fridge, and use it for up to a week, assuming it lasts that long. Ideal for an iced coffee, you can use it hot too - either dilute with hot water to taste, or zap in the microwave.

The best known product is probably the Toddy Cold Brewer which has a distinctly plasticky feel to it, but Amazon also offers a selection of cold brew pots from Hario, which are rather more elegant. 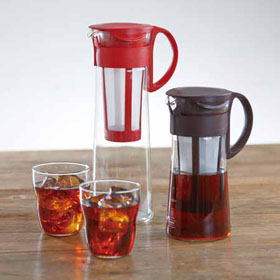 The Toddy brewer is a bit of a faff to use, frankly. First, you steep the coffee in a big plastic container, then drain it into a decanter.

With the Hario, you simply lift the basket containing the grounds out of the pot after about eight hours in the fridge. The Toddy needs replacement filters every three months, but you can make a fairly big batch of concentrate in one go.

Not being a big iced coffee fan, I don't think it's much more fuss to make a fresh hot coffee with the Aeropress first thing in the morning. That said, if the acidity is one of the things you don't like about coffee, or you like it cold anyway, the Hario pot is worth checking out.

Otherwise known as a vacuum pot, the Cona is a British device – though equivalents are available from other manufacturers, including Bodum – and has remained essentially unchanged for half a century, though modern versions are only available with a meths burner, rather than the electric ring of the early 60s one I have. If the meths is too slow for you, you can also heat it up on the cooker.

Aesthetically the Cona is the sexiest looking of the lot, in my view, thanks to the mix of glass and swooping curves, and there's undoubtedly something of the appeal of the chemistry set to it as well. 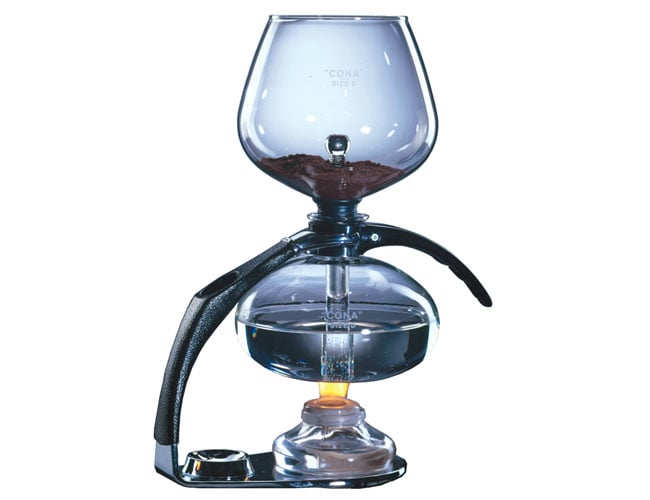 A key point for Cona fans (and not true of all vacuum pots) is the all-glass construction, so there's nothing to taint the coffee. Put grounds in the funnel, fill the jug with hot water, and place it over the heat. A glass rod in the neck of the funnel stops the grounds falling down.

When the water is close to boiling, put the funnel on top, and expansion of the small amount of air in the jug forces the water up the funnel, where it mixes with the coffee. The water, Cona says, doesn't get hot enough to make the coffee bitter.

Turn off the heat, and as the air trapped inside the jug cools, the water's drawn back down by a partial vacuum, leaving the coffee in the funnel, and a nice smooth brew ready to pour. It is also possible – as I used to do at school in the 1980s – to use a Cona to make tea. Cleaning up is fairly simple; all the grounds remain in the funnel, and you can lift out the glass filter rod then wash them through easily.

Available from suppliers including Hasbean, it costs around £95 (rrp £120) for the two pint "Model D" tabletop model.

A matter of taste

Of course, each of these is really suited to a slightly different situation; if there's just one of you needing a quick fix, then the Aeropress is swift and easy, and while I've been waiting for my machine back, that's the one that I've largely relied on for my morning brew. That said, a Moka pot is not really much more hassle.

If you're organised and plan ahead, then having a jug of concentrate in the fridge from cold brewing means you can get up and running fast. Run out, though, and it's a long wait – the lower acidity may swing it for some, too.

The Cona is, perhaps, best suited for a bit of after-dinner theatre, or the heavy coffee drinker who'll get through a pot before it goes cold. It certainly does produce a great smooth brew, and if you're concerned about the cost, the "Kitchen" model omits the stand and can be bought for around half the price, while the similar Bodum Pebo is around £40.

So, three of the less common ways of making coffee, put through their paces – have you any other favourite ways of brewing? ®

* For the uninitiated, that's the thin layer of coffee foam (naught to do with milk) at the top of a cup of espresso.