Invisible: The Dangerous Allure of the Unseen

Former physicist-turned-science writer Philip Ball has set himself a nearly impossible task with his choice of title, and to cover such a massive and nebulous subject in just 282 pages. He begins by asking the rhetorical question: “What would you do if you were invisible?”

He assumes our answer to be a mixture of power, sex or money, before whisking us off into distant antiquity to introduce us to the myth of Gyges, who indulges in all three.

We are thrust headlong through the mythical centuries via Perseus, Zeus, the Mabinogion, Platonic morals and Wagnerian cycles before Mr Ball expresses a preference for Tolkien’s ring over Harry Potter’s cloak.

The medieval centuries are represented by the usual disreputable crew of alchemists and witchfinders before the modern age dawns on such secular saints as Shakespeare and Newton. There is an interesting point made about religious sectarianism of the 17th century and how Latin incantations became synonymous with the dark arts. 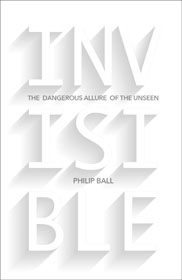 We eventually arrive in the 19th century where the main action of this book takes place. The age of Marconi, Lumiere, Edison, Kelvin, Crookes and Maxwell, the era of theosophists, table tapping, miasmas and the luminiferous ether.

It is only here that Philip Ball really approaches his subject in any great detail and where his cultural references match his scientific ones. Both fade rapidly after the discovery of X-rays. W.S. Gilbert is mentioned more often than Planck, Kipling quoted more often than Einstein. Ball’s scientific references are Nobel international; his cultural ones, however, are a little Anglocentric.

We are then dragged back a couple of centuries to the microscopic investigations of Luuewenhoek and Hooke, before being shunted forward into the nineteenth century and their relevance to the scientific work of Pasteur, Lister and Semmelweiss. There is no mention of Galileo, Kepler et al gazing in the opposite direction through similar lenses and making the unseen, seen.

Ball's treatment of the time between Marie Curie's heyday up until the present day is a very sporadic affair. Various adaptations of H.G. Wells are discussed. There is an interesting section regarding Ralph Ellison’s Invisible Man and its equation of black = invisible, but the author just throws in Michael Jackson’s whiteness as a cheap contrast.

Strangely, there is no reference anywhere to the perceived invisibility of the aged or poor, though the invisibility of women in the 19th century is briefly mentioned. Wartime camouflage is adequately discussed, before we get to the present day, where we are offered Stealth fighters, optical illusions and total invisibility solutions, none of which seem to work very well. It would have been interesting if the parallels between 21st century dark matter and 19th century luminiferous ether had been made.

If you want to know how William Crookes’ spirit mediums deceived him, or which is the best screen adaptation of The Invisible Man, then look no further, for this is science writing with a decidedly retro feel. Mythology, occultism and 20th century science are done better elsewhere.

Moreover, there is no mention of modern pseudoscientists such as Wilhelm Reich and his orgones, or William Burroughs' “El Hombre Invisible” who offered practical advice on how to be invisible. Even in Ball’s favoured era of the late nineteenth century, there are no maverick voices such as that of Alfred Jarry, who lampooned the works of Kelvin, Crookes and Maxwell in his bizarre Dr. Faustroll which ends with his calculation of the surface area of god – the midpoint between zero and infinity!

This is not a bad book. That said, it is a book which promises too much and consequently fails to deliver. It is hard to know who to recommend it to. Perhaps it would make the perfect gift for a crusty old relative with a penchant for science, who likes his history painted with the broadest of brushes – or, perhaps, a studious teenager who needs weaning off Brian Cox.

As a historian of science Ball has his charms, but as a cultural commentator he is seriously lacking. I leave you with a quote from the author regarding magic, but which could apply equally to this book:

“One is constantly wondering if it is a serious intellectual enterprise, a smokescreen for charlatans or the credulous superstition of folk belief”. ®