Documents leaked by Edward Snowden suggest during the noughties, the NSA massively expanded the information it shared with its Five Eyes allies and other agencies.

In slides given to The Intercept, the NSA boasts that its ICREACH program “increases NSA communications metadata sharing from 50 billion records to 850+ billion records”, with a footnote adding that 126 billion of these new records came from “2nd party SIGINT partners”.

At the same time, there was also a massive increase in the metadata the NSA was storing. The date, time, duration, called number and calling party – drawn from old PSTN systems – plus more than 20 new fields including latitude and longitude became part of the data-sharing.

To cope with all of this the NSA also needed to create a federated database search engine, in essence its own middleware sitting between the databases and the users. 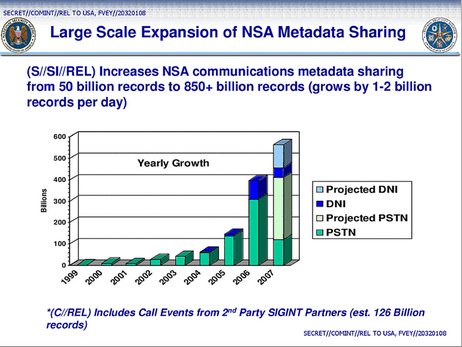 Massive increase in NSA's metadata volumes in 2006/2007. Image: The Intecept

The documents, dated 2006 and 2007, describe ICREACH as a “federated query” engine that would search “across all data sets for information relating to a target identifier.” The leaked documents say an agent could search from a single login to retrieve “phone number, global mobile satellite and cellular events and selectors, e-mail address, etc”.

Data brokers were also crafted to give the NSA's partners – the Australian Signals Directorate (then DSD), Britain's GCHQ, New Zealand's GCSB, Canada's CSE and the US FBI – access to the same search capabilities. 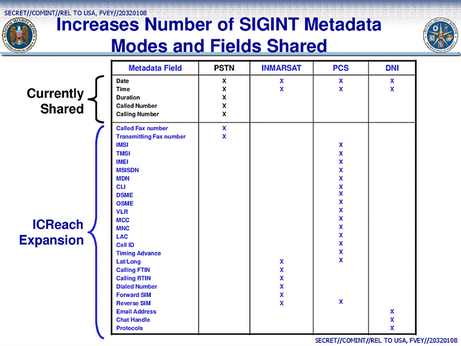 While maintaining the position that metadata is “information about content (but not the content itself)”, the NSA also notes that the data collected includes “formats and protocols used to render the information for people and systems”.

The middleware also meant that analysts were able to work on intelligence leads “without requiring access to raw intelligence”, the leaks claim. ®