Boffins attempt to prove the universe is just a hologram

Is this the real life? Is this just fantasy?

How can we tell from the inside of our Universe if it’s actually real or just a hologram? Boffins at Fermilab have set out to answer this thorny question with a new experiment in the National Accelerator Lab called the Holometer. 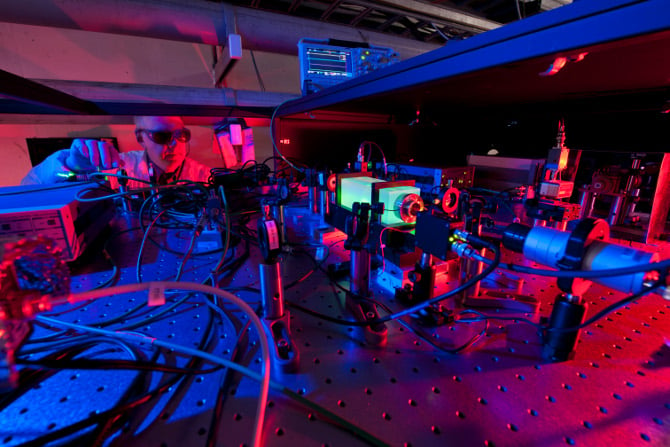 Lasers are SO COOL

If folks inside our telly could think about it, they wouldn’t be able to tell that they were nothing more than a 2D projection, because their world looks 3D to them. In the same way, there’s no simple way to tell if the world we see around us is an illusion, a collective hallucination or the real 3D deal.

Scientists reckon it’s possible that, just like the pixels that make up the 3D image on your TV, all the information about the Universe could actually be encoded in tiny packets in just two dimensions. These natural pixels would be ten trillion trillion times smaller than an atom – a unit known as the Planck length. Things get heavily quantum from this assumption on…

“We want to find out whether space-time is a quantum system just like matter is,” said Craig Hogan, director of Fermilab’s Centre for Particle Astrophysics and the developer of the holographic noise theory. “If we see something, it will completely change ideas about space we’ve used for thousands of years.”

In quantum theory, you can’t know both the exact location and the exact speed of subatomic particles at one time. If space comes in 2D pieces that have limited information about precise locations, then it would be subject to same theory of uncertainty.

To figure out if they’re right, boffins need to look for the jiggle in the hologram. Matter continues to move as quantum waves even when it’s cooled to absolute zero, so digitised space bits should also have built-in vibrations even in their lowest energy state.

The Fermilab’s Holometer will attempt to measure the quantum jitter of space itself using a pair of interferometers placed close together. Each instrument will send a one-kilowatt laser beam at a beam splitter and down two perpendicular 40m arms. The light will then be reflected back to the splitter when the two beams recombine, creating fluctuations in the brightness if these vibrations exist.

The tricky part will be separating out any “holographic noise” from extraneous background sources, like radio waves from nearby electronics. The Holometer, which is the most sensitive device ever created to measure quantum jitter, is testing on such a high frequency that the motions of normal matter shouldn’t be a problem.

“If we find a noise we can’t get rid of, we might be detecting something fundamental about nature – a noise that is intrinsic to space-time,” said Fermilab physicist Aaron Chou, lead scientist and project manager for the Holometer. “It’s an exciting moment for physics. A positive result will open a whole new avenue of questioning about how space works.” ®