Time Warner Cable is staggering back to its feet after wrestling with a major network outage that hit a number of big cities in the US on both the East and West Coast of the country this morning.

A spike in users being kicked offline was reported by Down Detector around six hours ago.

Most Americans who are Time Warner Cable customers were tucked up in bed at that time. But they are slowly waking up to discover network problems blighting the telco.

The company told the Twitterati that it was attempting to fix the technical glitch.

We're working to restore services to all areas as quickly as possible; no ETR. Tweets will be delayed while this is addressed.

We're working to restore services to all areas as quickly as possible; no ETR. Tweets will be delayed while this is addressed.

A senior spokesman at Time Warner Cable blamed routine maintenance for the massive outage to the network, which serves 15 million subscribers in the US.

He added that the system had now been "largely restored".

The network blackout affected 28 states in the US, according to a heat map created by Down Detector. 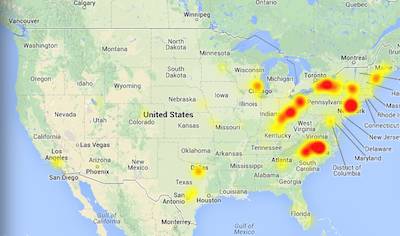 Did someone switch it off and forget to turn it on again?