Apple has filed for a patent on technology to put small displays in the sidewalls of a smartphone.

The documents submitted by the company to the US Patent and Trademark Office (USPTO) describe a device which uses a flexible screen capable of being bent around the corners of the casing.

The bent screen, according to Apple, could then be paired with an open handset housing, allowing the exposed corners and sides to act as touchscreen panels.

"Edge displays may alternately function as virtual buttons, virtual switches, or informational displays that are supplemental to front side displays," Apple writes in its filing. 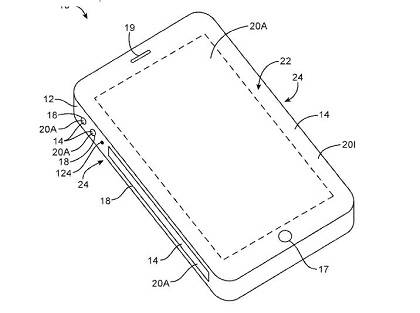 Using this description, it's not hard to imagine a future iPhone which could do away with nearly all of its few remaining hardware buttons. Animated buttons could, for example, replace the two side volume and brightness controls on the current iPhone layout.

The panels could also possibly be customized by the user with set themes or animated for use as controls by iOS apps and games.

The patent filing, credited to Apple engineers Scott Myers, Stephen Brian Lynch and Anthony Montevirgen, was only submitted to the USPTO in May of this year, so there's no telling how far off it is from actual implementation as a prototype. As always, it bears noting that many of the technologies filed as patent applications never make it into finalized products.

Still, the filing should excite fanbois looking for leads on what the next few years of iStuffs will look and feel like. With an upcoming class of iPhones due for September, we should get further clues about where Apple is going with its flagship handslab in a matter of weeks. ®