Will we even need apps any more?

Comment In a world of where every mobile device contains a personal assistant, who will need mobile apps?

Do you suffer from app clutter? My smartphone has lots of apps on it too. Finding the right one can be a pain, even though I have stuck some in folders to make the presentation less crowded on the screen.

Then it has got to be fired up and the app navigation choices made. App clutter and sprawl do not matter, I thought, until I had an epiphany on the road to Dagenham, kind of like a Siri of Tarsus SPELLING moment.

A wake-up alarm was needed and I thought I'd try Siri, my iPhone's speech recognition assistant. "Wake me at seven am, please Siri," I asked... and Siri confirmed that an alarm had been set for 7am, just like that.

It got me thinking. Siri had just needed a button push and some spoken words.

Guess I'll be using Siri in future for alarm setting, and this prompted an idea: who, in a world of capable smart phone assistants, will need smartphone apps in the future?

Want a weather forecast for Gloucester? I could ask Siri instead of firing up the BBC weather app.

Want to know what flamenco means? Ask Siri instead of firing up Safari and Googling the word or looking it up in Wikipedia.

Want to know how to get to Union Square in San Francisco from the waterfront? Ask Siri for directions and don't bother firing up the map app.

I'm running ahead of myself here: Siri's question-answering repertoire is currently limited, but as sure as eggs is eggs it's going to grow. So too will that of Microsoft's Cortana and Google's Now, three smart talking thingies. These things could get so very capable as to become an incredibly powerful and sticky feature of a smartphone/tablet operating system in a mobile-first world.

Surely the beady eyes of Bezos' Amazon are fixed on this prospect too with the acquisition of Evi. Will the Amazonites prepare the kindling and light a speech-recognising fire? Isn't it a cold dead certainty...

Where can I buy a Sonos Play:3 speaker for the best price?

Book me a double room in a Los Angeles hotel near the airport please.

Any direct flights to Paris from Denver on September 30th?

OK. Book the 9pm one and hire a Hertz car at Charles De Gaulle airport for my arrival.

Pay the restaurant and add the 15 per cent tip please.

Take me on the Boston North End walking tour please.

Turn my home heating on, please.

Answer my phone please Siri and block all unknown callers. 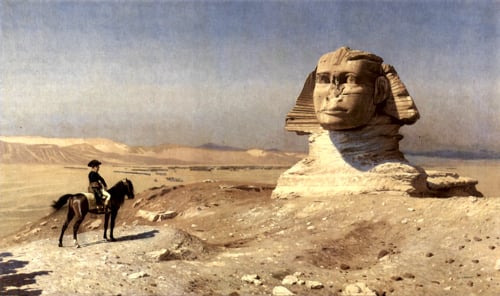 Remember Ozymandias? Bonaparte Before the Sphinx by Jean-Léon Gérôme

Do you agree with what I'm seeing here? The prospects are endless and Siri/Cortana/Google whatever should become the speech recognition app interface abstraction layer. We will still need app functions but they will be hidden away behind the smart personal assistant (SPA).

If this vision, this view of the SPA future, is correct then a whole world of smartphone and tablet apps is going to be wiped out. Siri becomes the app-slayer in the Apple world, Cortana will be committing appicide in the Windows universe, and Google's Now will become the murderous app killer in the Android arena.