Agreement aims to 'do no harm' 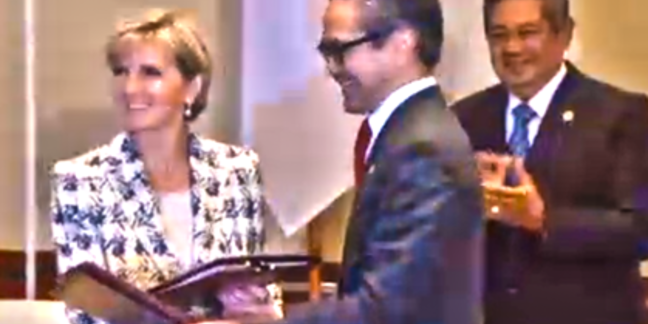 Australia has signed a code of conduct to promise not to spy on Indonesia's elected officials in a bid to heal seeping wounds opened by NSA leaks.

Prime Minister Tony Abbott, who was not in power when the spying occurred, initially refused to comment on the allegations and said Australia should not "be expected to detail what [it] does to protect the country".

The Joint Understanding of a Code of Conduct, a two-point addendum to the existing 2006 Lombok Treaty, came nine months after SBY in response called the spying a "betrayal", and demanded a pledge from Australia to end the practice. He then cut cooperation in intelligence, military operations and combating of people-smuggling.

1. The Parties will not use any of their intelligence, including surveillance capacities, or other sources, in ways that would harm the interests of the Parties.

2. The Parties will promote intelligence cooperation between relevant institutions and agencies in accordance with their respective national laws and regulations.

The document did not specifically rule out spying between the two countries but stated that such intelligence would not "harm the interests of" either country, and a second more amorphous point that intelligence cooperation would be promoted in a potential bid to make relationships between spies cozier.

Australia's foreign minister Julie Bishop signed the document during a United Nations meeting in Bali and said the agreement provided the basis to "enhance cooperation between Australian and Indonesian agencies".

Indonesian Foreign minister Marty Natalegawa said the document was "very inclusive and very exhaustive" and was centred on trust and good intentions.

But cynics could see the document as an easy and belated win for Australia which both escaped with less than a bloody nose and shored up its hardened immigration stance by towing some nine refugee boats back to Indonesia during the nine-month diplomatic fallout. ®