NASA to reformat Opportunity rover's memory from 125 million miles away

Interplanetary admins will back up data and get to work

IT administrators at NASA's Jet Propulsion Laboratory are preparing to perform an interplanetary remote wipe and reboot on its Martian Opportunity rover after the decade-old explorer began to get a bit senile. 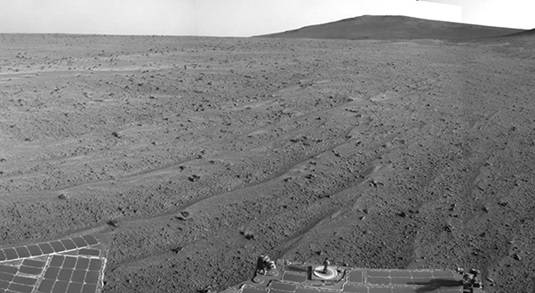 The latest view from Mars sent by Opportunity

Opportunity's computer systems are powered by a radiation-hardened IBM 20 MHz RAD6000 RISC processor and it stores data to upload to Earth on 256 MB of flash memory. Individual cells in each section of its flash memory have now been overwritten so many times that Opportunity is resetting itself dozens of times a month.

"The flash reformatting is a low-risk process, as critical sequences and flight software are stored elsewhere in other non-volatile memory on the rover."

The team plans to upload all the data stored in Opportunity's memory banks for backup on Earth. A reformatting command will then be sent to the rover early next month, which will clear healthy circuits and identify the duff ones to be avoided in the future.

Once the memory is clear the IT admins will reboot the system and reload the data. To make sure there's no corruption in the 125 million-mile upload, the admins have slowed down the data transmission rates considerably in favor of clarity and a careful approach.

It's a first for Opportunity, but five years ago the JPL team did have to perform a similar process on Opportunity's twin Spirit, after it began to suffer what the team calls "a series of amnesia events." Given the two rovers are very long in the tooth some problems of this type were expected and practice runs have been made regularly.

It's remarkable that Opportunity is still rolling, after over 10 years on the Martian surface. The rover was only expected to last 90 Martian sols, or a little over three months Earth time, but that was based on a misunderstanding about the Red Planet's environment.

For solar-powered planetary explorers, dust is a killer. The charged dust of the Moon is a major problem for solar power on our natural satellite and it had been assumed that Mars would pose similar issues. But the strong winds of Mars periodically give the panels there a spring clean and the rovers are expected to carry on as long as their wheels will roll.

Sadly for Spirit its luck ran out after 4.8 miles of travel on May 1, 2009, when it got stuck in a sand trap. It was unable to align itself to the Sun and recharge, and after numerous failed attempts at communication filed, the rover was declared dead on March 22, 2010.

Opportunity is still going relatively well and has trundled across 25 miles of the Martian regolith, although it spent six weeks stuck in a sand dune in 2005 until the JPL team figured out how to free it. Given the way Curiosity's wheels are coming apart, Opportunity might yet outlive its nuclear-powered cousin. ®