Cartoonist tackles your Fermi problems in What If?

Page File They say you shouldn’t get a fan to review a book and it’s certainly tough to be critical when you pick up the new book from Randall Munroe, the much-loved creator of awesome science webcomic XKCD. What If? is a series of usually ridiculous questions from the public to XKCD’s inbox that Munroe answers using science and mathematics.

Using a giant machine gun for propulsion. Credit: What If? / Randall Munroe

If you’re worried that Munroe’s typical style of dry humour wouldn’t come across well in longer form, don’t. Writing out the explanations actually allows Munroe greater scope to stretch his laughter muscles and set up little XKCD sketches that pay off wonderfully after a longer set-up. That’s not to say that each question’s solution goes on for pages, most are just a few pages long and many are even shorter than that.

Any Reg reader is likely to be hooked on the book from the opening preface, where Munroe sets out his very own set of new measurements including the Ice Foot, the Royal Foot and the London Foot. Certainly, most self-respecting science buffs will be keen once they read the disclaimer, which begins with that most beguiling of phrases for the experimental mind:

Do not try any of this at home.

The author of this book is an internet cartoonist, not a health or safety expert. He likes it when things catch fire or explode, which means he does not have your best interests in mind. The publisher and the author disclaim responsibility for any adverse effects resulting, directly or indirectly, from information contained in this book.

And if that doesn’t capture the interest, the crazy hypotheticals of the denizens of the internet certainly will. What would happen if the Earth and all terrestrial objects suddenly stopped spinning, but the atmosphere retained its velocity? What if I took a swim in a typical spent nuclear fuel pool? What would happen if you made a periodic table out of cube-shaped bricks, where each brick was made of the corresponding element? These are just some of the questions Munroe tackles in style, going through scenarios often a nanosecond at a time so you can see just what would happen. 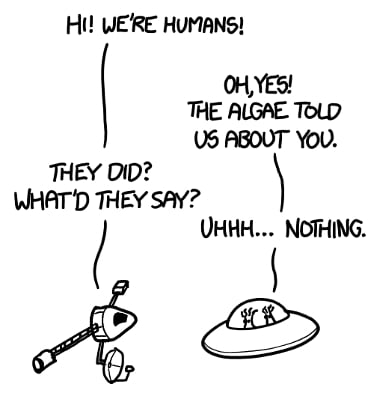 Alien astronomers learn about humanity from algae.
Credit: What If? / Randall Munroe

Even well-worn questions like what would happen if everyone on Earth gathered together and jumped at the same time are given a new slant. Munroe points out that after Earthlings have stood together on Rhode Island – because that’s where we’d all fit – and jumped and had nothing whatsoever happen except a lot of noise, that’s when things would get interesting.

Eventually, the air grows quiet. Seconds pass. Everyone looks around. There are a lot of uncomfortable glances. Someone coughs. A cell phone comes out of a pocket. Within seconds the rest of the world’s five billion phones follow. All of them – even those compatible with the region’s towers – are displaying some version of “NO SIGNAL”. The cell networks have all collapsed under the unprecedented load. Outside Rhode Island, abandoned machinery begins grinding to a halt.

What happens when everyone on Earth gets together to jump is that everyone on Earth is together in one place, causing the collapse of modern civilisation and a lot of death and destruction. Which is obvious when you think about it, but you might not without the help of someone like Munroe.

Interspersed among the interesting and creative questions are the downright disturbing or slightly weird ones. “Would it be possible to get your teeth to such a cold temperature that they would shatter upon drinking a hot cup of coffee?” asks one Shelby Hebert. “Thank you, Shelby, for my new recurring nightmare,” answers one of Munroe’s XKCD stick figures. Strange questions like this abound, but there are also some truly terrifying ones, like:

How many houses are burned down in the United States every year? What would be the easiest way to increase that number by a significant amount (say, at least 15 per cent)?

How fast would a human have to run in order to be cut in half at the bellybutton by a cheese-cutting wire?

What is the total nutritional value (calories, fat, vitamins, minerals, etc.) of the average human body? 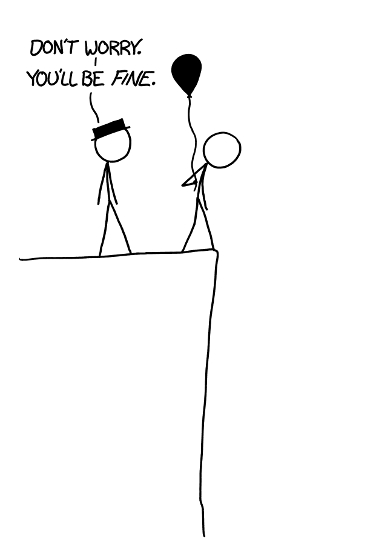 Using a helium balloon as a parachute. Credit: What If? / Randall Munroe

Thankfully, also liberally sprinkled among these Fermi solutions are little nuggets of scientific gold, fun factoids from the world of science that you may have heard before but are nonetheless fascinating every time you hear about them. Such as the Clarendon Dry Pile in Oxford University, also known as the Oxford Electric Bell, which has been ringing continuously since 1840.

“Nobody knows exactly what kind of batteries it uses because nobody wants to take it apart to figure it out,” Munroe writes.

Or the Wow signal heard by SETI in 1977, the radio transmission that fit the criteria for alien contact from non-Solar System origin that lasted for over a minute, but has never been heard again. If you haven’t heard these gems before, it’s fantastic to stumble across them. Even if they are well-worn to you, framing them in these hypothetical questions gives you back a buzz of the scientific “Cool!” you felt the first time you heard them.

This is, in essence, what Munroe does so well. With this book and with XKCD, you’re a kid with a chemistry set all over again. His enthusiasm for all things scientific is infectious in the same way that other internet-science forums, such as I Fucking Love Science, also do so well. If governments are serious about getting more of the yoof into STEM subjects, this should be required reading for teens all over the world. And for grown-ups, it’s just fun to remember that science is really, really cool. ®