The Birth of Korean Cool

Over the last ten years the Korean wave of popular culture known as Hallyu has slowly inveigled its way into my consciousness. Before the YouTube behemoth that is Psy, I wasn’t immune to wondering how it could be that the top ten players of Starcraft II were all Korean and why my Japanophile Dad suddenly changed allegiance to Korea after visiting Seoul. I even chuckled at my best friend’s stories of hanging out on Hooker Hill and drinking Soju mixed with fruit juice.

Euny Hong (reminding me of Snow Crash’s Hiro protagonist) is my hip and witty tour guide through modern South Korea. She does an excellent balancing act of relating her somewhat painful experiences of trying to fit in to Seoul’s Gangnam district as a teenager and then, without prejudice, informing me of South Korea’s ambition for worldwide cultural dominance, and all this within a nifty 250 pages no less.

Hong’s book takes time to look at what has helped create Korea’s cultural Perfect Storm with chapters dedicated to detailing its comparatively recent development from being a third world to first world country. It goes further by relating how confusing that has been to a nation whose ideology is based on shamanistic nature fetishism including old Korean ladies dressed like American five-star general MacArthur “ … donning trademark sunglasses and corncob pipe” and strict Confucian principles. 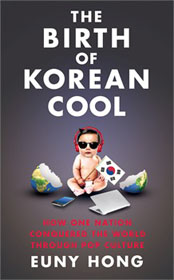 Stasi-like class informant sessions and government bans on out-of-school tutors pale in comparison to the physical and psychological purgatory of exam preparation as observed by Hong. She captures how the fearsome disciple of Korean educators have modelled the Korean character, all of which is of special interest to me, being a college lecturer.

If only my college had a doduk (moral education) class. This level of commitment to a greater collective future for the nation as a whole is mirrored in K-pop stars’ “indentured servitude”. The expectation of signing a thirteen-year contract sees would-be K-pop stars barely bat an eyelid.

Being an ardent worshipper of anything Park Chan-wook - creator of Oldboy and Sympathy for Mr. Vengeance - I had an epiphany when Hong described the Korean concept of han: “that culturally specific, millennia-old rage against fate”. This huge motivating force and the heavily government-funded Ministries of Culture, have informed the nation’s coordinated push to be the worldwide purveyor of cool.

The fact that Spike Lee’s reboot of Oldboy was such a disaster shows America is losing ground in the battle to be the world’s number one creative economy. Certainly, it seems Korea is all about the long game by “getting the crucial but still dormant third world market hooked on Korean pop culture”.

Technology plays a huge part in Korea’s economic shift and Hong spends a chapter detailing the rise and rise of Samsuck – an interesting idea that “Being number one matters, but being first does not”. President Park’s Ministry of Future Creation and Science whose goal is ‘turning the nation into a combination of Silicon Valley, Hollywood, and Industrial Light and Magic” could, if successful, “upend the widely held belief that trying too hard to be cool makes you uncool.”

Having recently watched HBO’s documentary Love Child about a couple whose kid dies of neglect at home as they nurture their MMORPG characters in an internet café, the book gives pause to reflect the detrimental effects of ordinary people caught up in Korea’s cultural arms race. Hong postures that the Korean PC video game industry pulled Korea out of a serious unemployment crisis, but at what personal cost to its citizens?

Euny Hong and her well-researched primer on all that is current-day South Korea manages to persuade me that the country – as purveyor of Michelin-starred Kimchi and the biggest manufacturer of free-to-play MMORPG’s in the world – will always be king of the cultural last minute photo-finish. Essential reading for Japanophiles and anyone with an interest in pan-Asiatic hip – just don't mention Babymetal. LO ®