And at the back of the field, Windows 8.1 is sprinting away from Windows 8

Windows XP lost nearly one per cent of global market share during August, according to both Netmarketshare and StatCounter, but there's not been a corresponding bounce in the prevalence of other Microsoft operating systems.

The Reg has been tracking the two OS-counters for 11 months now and during that time Netmarketshare has tracked Windows XP from 31.24 per cent to 23.89 per cent of detectable PCs online. Statcounter started with a lower number – 21.28 per cent – and has charted a slower decline to 14.29 per cent.

This month, both outfits show a bump in Windows 8.1 use. Netmarketshare records it going from 6.56 per cent to 7.09 per cent while Statcounter records a jump from 7.45 per cent to 8.25 per cent. At a guess, the rises could reflect business PC fleet refreshes conducted during the northern summer when staff numbers thin out, and perhaps also some back-to-school PC purchases.

And here's Statcounter over the same period.

Graphics? You say you want graphics? How about the one below, which averages the two OS-counters' data and plots it as a line graph? 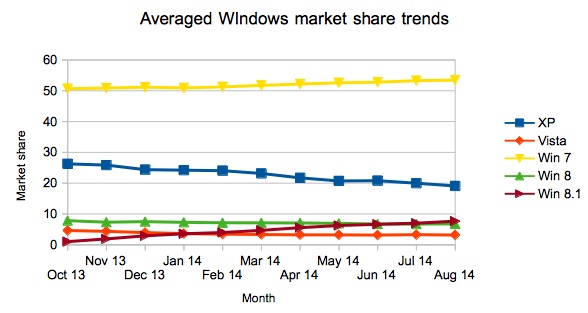 Conclusions? XP has a rump of users in no hurry to move, Windows 8.1 is slowly taking market share but there are enough Windows 7 buyers out there to keep its market share more-or-less steady even though the overall pool of Windows users increases. That means there's a hard core of folks – probably businesses – that Microsoft just can't shift to Windows 8. ®