The effect was first noted way back in fourth century Roman times (circa 290-325 AD) with the crafting of the Lycurgus Cup, an engraved glass goblet that has a green tint when lit from the front and a red one when the light source is behind the cup.

It was made using dichroic glass which has this colour change property depending upon the position of the light source.

This glass has nanoparticles of gold and silver dispersed through it and it was on this use of such particles that the boffins, led by first year PhD student Yunuen Montelongo, focused.

They understood that silver nanoparticles exhibit iridescence, that they reflect light in different colours depending upon the direction of the light source and their own dimensions. Such colour effects can be used to increase the bit-carrying density of holographic storage. 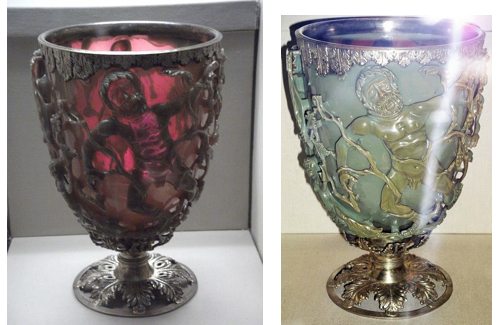 A nanoparticle is 1 to 100 nanometres in size. The boffins made a thin silver film with 16 million nanoparticles per square millimetre – the nanoparticles being approximately 1,000 times smaller than the 17-20µm human hair width. These particles reflect light in different colours according to their size and shape, and the collected reflected light from all of them can form an image.

If plasmonics, the science of this effect, can produce the goods, then laptop and TV screen pixels could be built using such particles and be 10 to 100 times smaller. Holographic storage capacity could also become denser but for that to resuscitate this dead storage technology would require much more than just plasmonic science discoveries.

Calum Williams, a PhD student and co-author of the paper detailing the research, Plasmonic nanoparticle scattering for colour holograms, said in a Cambridge University release: "This hologram may find a wide range of applications in the area of displays, optical data storage, and sensors. However, scalable approaches are needed to fulfil the potential of this technology.” ®

By applying this method, all of the scattering characteristics of the nanoparticles are transferred to the reconstructed field. Hence, we demonstrate that a narrow-band reconstruction can be achieved for direct white light illumination on an array of plasmonic nanoparticles.

Furthermore, multicolor capabilities are shown with minimal cross-talk by multiplexing different plasmonic nanoparticles at subwavelength distances. The holograms were fabricated from a single subwavelength thin film of silver and demonstrate that the total amount of binary information stored in the plane can exceed the limits of diffraction and that this wavelength modulation can be detected optically in the far field."