World+Dog wants wearables to be the Next Big Thing in tech, but the sector has also learned from Google that ugly devices blending reality and data can raise both privacy and aesthetic objections.

Little wonder, then, that Intel has teamed with a fashion designer to craft a gadget that won't get its wearers assaulted or banned from restaurants or movie theatres - or called “Glassholes” in public. Chipzilla has asked design house Opening Ceremony to craft something less obtrusive.

The result, crafted by Humberto Leon and Carol Lim, is, at least, anodyne enough so that doesn't besmirch "supermodels" Kirsten Owen and Ajak Deng, pictured below, who Intel hired for a Collier photo-shoot.

Blingzilla says MICA – “My Intelligent Communication Accessory” – brings to the wrist text messaging, meeting alerts and general notifications, all over 3G. It invites the wrath of animal rights pressure group PETA, with water snakeskin to set off the “semi-precious gems”. There's a curved sapphire glass touchscreen and the device has wireless charging.

Since there's only so much this Reg hack can bear, we'll quote directly from the Intel announcement, which offers this description of the bracelets: 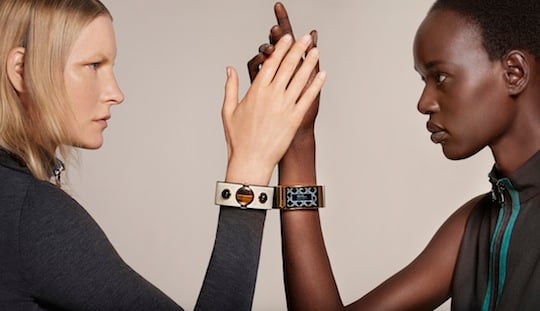