DREADNOUGHTUS: The 65-TON DINO that could crumple up a T-Rex like a paper cup

Paleontologists report that they have discovered the remains of a new type of dinosaur - dubbed Dreadnoughtus schrani - that tipped the scales at 65 tons, was 85 feet long ... and was still growing fast when it died. 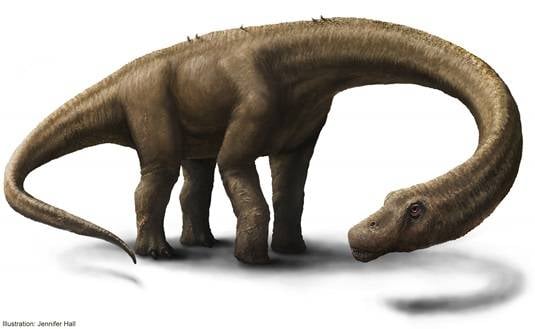 Kenneth Lacovara, associate professor at Drexel University's College of Arts and Sciences in Pennsylvania, discovered the Dreadnoughtus fossil skeleton in southern Patagonia in Argentina along with a smaller herd mate.

The two were drowned in a flash flood about 77 million years ago, and Lacovara said they are two of the most complete skeletons of the massive herbivores classed as titanosaurs.

"We're not saying this is the biggest dinosaur out there," Professor Lacovara told The Register, "but it has the largest calculable weight of any known land animal."

It's thought that Argentinosaurus, a similar titanosaur, was the largest land-walking dinosaur but there's very little to go on – to date only 13 bones have been found of that beast. By contrast Lacovara and his team have recovered nearly half of the complete Dreadnoughtus skeleton, including most of its neck and all four limbs.

Those remains show that the largest Dreadnoughtus specimen was still going through a growth spurt, Lacovara said. The shoulder bones hadn't fused, which would be the case with a more mature specimen, and analysis of the cells the shoulder contained indicate the newly-discovered beast may have been a relative youngster.

Dreadnoughtus compared to a puny human. That's a lot of dinosaur. (click to enlarge)

Youth aside, it was a very impressive beast. Judging from the size of the bones at the base of its tail the creature had a massively muscled rear end that would be capable of knocking over any predator that took a shot, which is how its name was decided.

"About two years ago we had a blizzard, and I sat on couch with a hot chocolate and started to write out dinosaur names. I got about two dozen, and the last one on the list was Dreadnoughtus," Lacovara said.

"It seemed appropriate as the dreadnoughts were the first big battleships and were considered impervious to some weapons. This dinosaur was as big as a house and thanks to its unbelievably muscled tail nothing could conceivably prey on it."

Dreadnoughtus' massive tail would have had crushing force (click to enlarge)

Four separate expeditions were required to recover the remains of the two skeletons and they were shipped in a container to Drexel for study. The haul of bones was so large that they had to be split up into three batches and sent to the Carnegie Museum of Natural History in Pittsburgh, The Academy of Natural Sciences of Drexel University and Lacovara’s lab at Drexel for analysis.

"That's the problem with studying super-massive dinosaurs - too many bones," Lacovara joked. "Sometimes I'm a little jealous of those studying smaller dinosaurs; you can fit the skeletons of some theropods on your lap for the flight home."

Once in the lab the teams spent thousands of hours running them through a NextEngine 3D laser scanner which built a detailed topological map of the remains. These are available for download and have been released to the general public, while the full findings on the new animals has been published in the journal Scientific Reports.

"I think laser scanning is the wave of where science if going, the democratization of the science," he said. "You don’t need to go to a museum or have access to the bones to study them – it's great for students. I think in 5-10 years you might get paper rejected if it doesn't include these kinds of images."

After further study the Dreadnoughtus remains will be shipped back to Argentina, where they will become a permanent exhibit at the Museo Padre Molina in Río Gallegos. ®