'Named Data Networking' protocol is about the journey, not the destination

The US National Science Foundation, Cisco, Verisign, Panasonic and boffins from around the world have thrown their weight behind a new “Named Data Networking Consortium” that aims to develop “a practically deployable set of protocols replacing TCP/IP that increases network trustworthiness and security, addresses the growing bandwidth requirements of modern content, and simplifies the creation of sophisticated distributed applications.”

The group met for the first time in Los Angeles on Thursday and continue their gabfest on Friday.

Work on the Named Data Networking (NDN) has been going on for some time: the National Science Foundation has been pumping in cash since 2010. The significance of this launch is that industry is now involved, and the consortium is committed to producing open-source software to take researchers' work beyond the hypothetical.

Patrick Crowley, an associate professor of computer science & engineering at Washington University's School of Engineering & Applied Science says the group's efforts am to preserve “the balance between sharing information and protecting privacy at the same time.”

“That is very difficult for Internet protocols to handle,” he said, “but something at which NDN excels.” Crowley goes on to explain that NDN will be able to inform users if data on a bank's site was produced and signed by that bank. IP has no way to perform such a verification. NDN will therefore improve internet security.

The consortium says today's internet lacks security because it “ … was designed as a communication network so the only entities that could be named in its packets were communication endpoints.”

Under NDN, the name in a packet “can be anything — an endpoint, a chunk of movie or book, a command to turn on some lights, etc.” By allowing more specific addressing, NDN offers greater control. 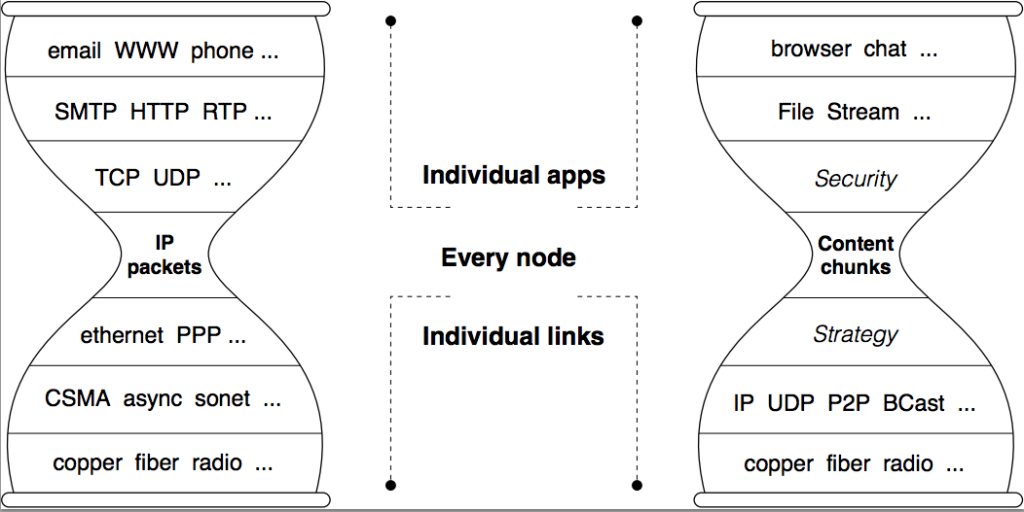 The consortium also says its approach won't break the current internet, with the diagram above showing how both offer a “thin waist” allowing communication among many different entities. The consortium hopes to publish “A specification of the standard formats for the two packet types, Interest and Data, in NDN data delivery” so that both simple carriage along the lines of TCP/IP and NDN's more nuanced approach to verifying content's source and connecting entities to content can be achieved.

There's no fixed delivery date for those specs, but the National Science Foundation's cash runs out in 2016. Many of the new commercial members have deep pockets, so it will be no surprise if they kick in some funds to keep the project running until something useful arrives. ®