It's official: Vendors are NOT shifting that networked storage

Network storage factory revenues of to $5.9bn saw a 1.4 per cent decline from the second 2013 quarter to the second 2014 quarter. Conversely, total disk storage revenues for the quarter were $7.8bn, 0.3 per cent higher than a year ago.

Head IDC storage tracker (Research Director) Eric Sheppard said: "The high-end decline was not as striking as last quarter but it was coupled with a drop in midrange sales, suggesting weak demand is spreading to other parts of the market. Bright spots within the global storage market include growth from entry-level storage and increased sales within EMEA and Latin America."

The chart below shows the quarter-by-quarter changes, with IBM having a noticeable rebound from last quarter's low point. Dell is included in the Others category in this chart, by the way.

The total disk storage numbers rank the suppliers differently, as the chart shows, with both IBM and HP showing strong quarter-on-quarter growth: 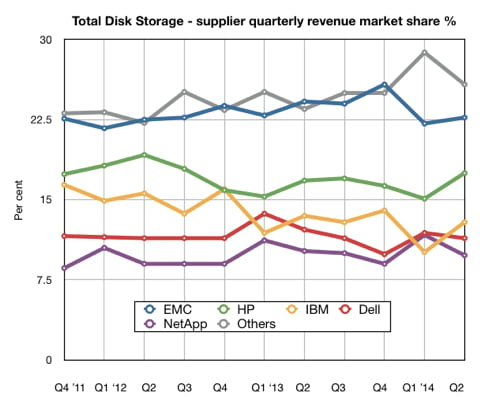 NetApp was in fifth place with 9.8 per cent, lower than last year's 10.2 per cent. Hitachi (HDS) is lumped in with the remaining suppliers in the Others group.

It will be fascinating to see if the overall declines continue next quarter.

But uncertainty, supply, power woes could cause trouble ahead
On-Prem7 Mar 2022 | 1

Do you trust your provider farther than you can throw them? Cloud priorities shifting in post-COVID world – IDC

Quantum computing to grow by 50 per cent per year until 2027, when revenue will still be chump change